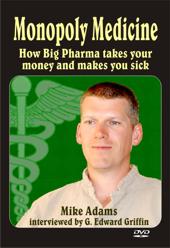 Mike Adams is a US internetshop owner and author from Tucson, Arizona. He founded several companies and publishing houses with affiliated websites in the USA, on which he takes a stand on various health related issues from a lay person's and pseudomedical point of view, and advertises several alternative products and therapies.

To spread his views, Adams runs the sites "Natural News", "The Consumer Wellness Center", "Better Life Goods", and the publishing house "Truth Publishing". Adams is the owner of "Arial Software LLC", a company selling Adams' software called "Email Marketing Director" which can be used as a "Mass Personalized Email Marketing Software" for the mass distribution of e-mail spam.

Adams is a global opponent of modern medicine and opposes any medication and consultations of doctors. He is a raw food proponent and committed Anti-vaccinationist and calls himself the Health Ranger or holistic nutritionist. He is an opponent of food which contains sugar, cooked or preserved food, „red“ meat, sweeteners glutamate, homogenized milk, bread and "white" flour, detergents of brand manufacturers, deodorants and shampoos as well as fluoridated toothpaste. In his opinion, Scientology is treated unfair.[1][2] Cold Fusion and so called free energy ideas and devices like e.g. the Focardi-Rossi Energy-Catalyzer are presented on his website in an uncritical way.[3][4]

There is almost no information available in the way of biographic data. His autobiography[5] only presents a few vague details. He claims to have been an executive in a software company. At the age of 30, he allegedly was diagnosed with type 2 diabetes, a disease caused by his nutritional habits and a severe lack of exercise, and claims to have cured himself with a diet and without medical help. A diet is part of the usual therapy of scientific medicine for that type of disease which can be controled this way.

Adams has compiled several absurd conspiracy theories usually on health-related issues without providing any evidence. He claims that pharmaceutical industry has created HIV vaccines with the sole purpose of creating as many "HIV positive persons" as possible to which they can sell anti-retroviral drugs at a huge profit. Mammography screening, according to Adams, will also create cancer and then need expensive treatment generating more profit. He refers to chemotherapy using the term quackery.[6] He is also a hardcore 9/11 truther, birther, and pretty much everything else-er.[7][8]

He claims to have evidence that e. coli bacterium causing the (mostly) German EHEC outbreak in 2011 was in fact a bio-engineered deadly superbug created by big pharma with the sole purpose to take "... total control over the global food supply and the outlawing of raw sprouts, raw milk and raw vegetables" to replace them with GMO food(genetic modified organisms). He also claims that GMOs are designed to contaminate the food supply with genetic code that causes widespread infertility among human beings. And those who are somehow able to reproduce after exposure to GMOs still suffer from degenerative disease that enriches the drug companies from "treatment."[9] Actual proof for those claims is never given.

In his articles, Adams claims vaccination was not only the cause of asthma, allergies and autism, he also suggests there were no "legitimate" studies on vaccination. In essence, the usual disinformation prevailing in vaccine denialism is being reproduced.[10][11]

Unfounded claims about Andrew Wakefield and his innocence as well as alleged "new evidence" is being spread.[12][13] This purported "new" evidence was already submitted during the lawsuit against Wakefield years earlier and is neither new nor a proof of Wakefield's innocence.[14]

Disinformation about HIV Infection and HIV-Tests

Publishers Kopp Verlag included a disinforming publication on their website which was authored by Adams, a medical lay person. He wrongly claims: „HIV vaccines cause a 50 per cent false positive rate in HIV tests“, and that today's HIV test only established HIV antibodies.[15] This is simply wrong: PCR-tests detect parts of the HI-virus and 4th generation ELISA screening tests (introduced approx. 1999) directly detect the p24-antigen of HIV1. Adams' statement only applies to ELISA screening tests up until their 3rd generation, and to Western-Blot-control tests.

Adams furthermore claims: Given certain conditions, up to 50 percent of HIV positive may be false, wreaking havoc to the lives of those patients who are falsely rated HIV positive. Adams refers to a group of persons who were vaccinated against HIV for research purposes and subsequently formed antibodies. Adams came to the wrong conclusion HIV-tests were losing credibility. However, Adams conceals the fact that there is no approved HIV vaccine and much less are there any widespread vaccination campaigns. Adams' statements therefore are completely irrelevant for the general population.

A HIV infection cannot be established only by an ELISA screening test, although the test statement is quite reliable. It is a screening test designed to detect potentially infected persons. The sensitivity of the ELISA test is given at 99.9%. This means that out of 1,000 HIV positive test persons, 999 will be correctly identified, while one will be diagnosed with a false negative result. The specificity is 99.8%. This means that out of 1,000 test persons not HIV positive, 998 will receive a correct negative result and just 2 a false positive result. A positive result in this test is never communicated to the tested person unless a second, more expensive and extensive Western Blot control test confirms the result. This control test has a specificity of about 99.9996%.[16]

Natural News also adopts articles by British racist David Icke, denying any connection between AIDS and HIV. Icke is known for his conspiracy theory according to which the earth was ruled by reptiloid shapeshifters.