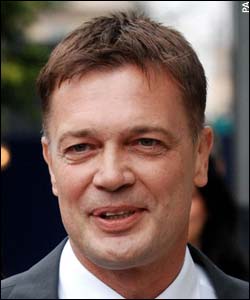 Andrew Jeremy Wakefield (born 1957) is a British surgeon who received a lot of attention with a 1998 publication in The Lancet, both among experts and in public. The article titled Ileal-lymphoid-nodular hyperplasia, non-specific colitis, and pervasive developmental disorder in children[1] correlates MMR vaccination with autism. As a consequence, vaccination rates dropped, especially in Great Britain.

In 2004, it became public that Wakefield had received 55,000 £ from lawyers representing parents of autistic children prior to the publication of his article.[2]. Lawyers were looking for connections between autism and vaccination in order to sue manufacturers of vaccines. This was known neither to Wakefield's co-authors nor to The Lancet. As a consequence, ten of thirteen authors stepped back.[3] In February 2010, the article was retracted by The Lancet.[4]

Wakefield resigned from his position in the Royal Free Hospital in London 2001, and now works for a private hospital in the USA. In 2007, he had to face charges by the British Medical Association.[5]In May 2010 he received an occupational ban[6].

In February 1998, a group around Andrew Wakefield published a report titled "Ileal-lymphoid-nodular hyperplasia, non-specific colitis, and pervasive developmental disorder in children" in the renowned medical publication The Lancet.[1] The report analysed the cases of twelve autistic children who were treated in the Royal Free Hospital in the north of London in 1996-1997. The report described bowel related symptoms which, according to Wakefield, were to be seen as proof of a completely new syndrome which he later called Autistic Enterocolitis. Wakefield recommended a closer investigation of possible causes in the environment of these children, so e.g. in respect to the MMR vaccine. The publication suggested a connection between stomach-bowel symptoms and developmental disorders found in these children which was perceived as ostensibly related to the MMR vaccination. A causal connection of MMR vaccines leading to autism, however, was not established. In a press conference prior to the publication, Wakefield said he recommended the use of single vaccines instead of the triple MMR until clarification was obtained. He further stated that eight of the twelve parents considered the vaccination a possible cause, as vaccination and first symptoms occured within days. He stated he could not support the further use of MMR vaccine without detailed investigation. In a video recording prepared for TV in advance he demanded to stop the use of MMR and replace them with single vaccines instead.[7]

Report, press conference, and video unsettled the Britisch public. A heated debate followed, in which both sides used Wakefield's research as arguments. He was publicly criticized, with his critics expressing doubts regarding correctness as well as ethics of his research. Government and National Health Service (NHS) emphasized that extensive epidemiological data showed no correlation between MMR vaccination and developmental disorders. Many parents refused to believe this, since official information had been discredited earlier, as in the case of BSE. Government was accused that their true motif for rejecting single vaccinations was the higher cost of these. As a result, MMR vaccination rates decreased from 92% (1996) to 84% (2002). It was suspected that only 60% of neccessary MMR vaccinations were performed in some districts of London which is substantially below what is needed for herd immunity of measles. Although no measles epidemic occured so far, physicians warned that epidemics were possible since the number of infections was increasing.

One issue in the dispute was that only the combined vaccine is available via NHS. Parents rejecting this vaccine can either pay for single vaccinations out of their own pockets or not vaccinate at all. Although Prime Minister Tony Blair publically defended the MMR vaccine, he refused to comment the vaccination status of his youngest son Leo at the same time.

The majority of paediatricians prefer the combined vaccine, as it is less strenuous for the child, and many parents rather have one vaccination done instead of three.

Epidemiological research on hundreds of thousands of children in numerous studies failed to indicate a link between MMR vaccination and autism. Critics of these studies, like the retired intern John Walker-Smith, although a supporter of the triple vaccine, labelled epidemiology a 'blunt tool' which does not necessarily expose such connections.[8] As an example, it is difficult to find to populations differing in vaccination status only.

Dr. Wakefield gave up his position at the Royal Free Hospital in 2001 and now works for a controversial private hospital in the USA. His continued studies include research on possible immunological, metabolical, and pathological changes caused by "Autistic Enterocolitis", as well as connections between bowel diseases and neurological disorders in children and a possible connection between these disorders and influences like vaccines[9]

In an article published 2011 in "health affairs" on the topic of vaccine opposition in the USA the authors (Kennedy et. al) come to the conclusion:

"Andrew Wakefield's report, which ran in the Lancet, may have been be "the flimsiest, most underpowered study supporting a conclusion of monumental importance to appear in a leading peer-reviewed journal in the past fifty years."[10]

In February 2004, journalist Brian Deer exposed information that Wakefield had recieved £ 55.000 in third-party funds prior to publishing the Lancet report, with the money paid by lawyers looking for a connection between autism and MMR vaccination.[11] According to the Sunday Times, several of the parents quoted were involved in law suits against manufacturers of MMR vaccines. Although Wakefield stated that these third-party funds had been public from the beginning, the fact that this was known neither to the Lancet nor to his co-authors raised much criticism. On February 20, 2004, the Lancet rated Wakefield's study flawed due to a fatal conflict of interest and concluded it should have never been published. Several of Wakefield's co-authors also criticized the lack of information about these third-party funds in explicit ways.[12] The General Medical Council, responsible for issuing medical licences and surveillance of medical ethics in Great Britain, began investigations.[13]

Furthermore, nine months before the incriminated report caused world-wide anxiety and uncertainty regarding the MMR vaccines, a series of patents protecting several potentially very profitable products happened to be submitted by Wakefield and the Royal Free Hospital Medical School in London. Obviously, such products would enjoy a much larger chance on the market if and when the MMR vaccines experienced a damage in reputation. The patents e.g. covered an allegedly safe measles vaccine and medication for the treatment of bowel diseases and autism which were all based on the assumption these conditions were caused by MMR vaccination.[14]

As a consequence of Brian Deer's article, ten of altogether thirteen authors of the report formally renounced the claim of having found a connection between autism and MMR.[15] Deer continued investigations in a documentation on British TV titled MMR: What They Didn't Tell You, which was broadcast Nov. 18, 2004. The report accused Wakefield of owning patents on a product competitive to MMR, and of being aware of test results from his own laboratories in definite contradiction to his claims.[16] On February 2, 2010, The Lancet announced to have the 1998 article removed completely from their list of publications.[4][17]

Further investigation by the English newspaper Sunday Times established that Wakefield and others, prior to the publication, received up to 3.5 million British Pound from a law firm which represented the parents of children allegedly affected. Andrew Wakefield apparently received 500,000 pound, with first payments already having been made two years prior to the controversial publication. Five of Wakefield's co-authors and one reviewer who checked the publication for The Lancet had also received personal payments. [18]

As a consequence, the Gerneral Medical Council prepared legal steps to have Wakefield's medical licence revoked.[19]

Epidemiological research shows an upward trend for autism in recent years. The cause is uncertain; however, a change in diagnostics and census is more likely than an increase in actual numbers.[20][21][22] Diagnosis of autism has intensified in recent years, with children being examined more efficiently and at an earlier age than before. A causal link between MMR and autism can be excluded with utmost probability, as is shown by the studies quoted below which also happen to be far more comprehensive than Wakefield's. Science today assumes that the different forms of autism are essentially coined by genetic factors. The importance of genetics in this field is emphasized by studies including twins: Whereas identical twins show a correlation of 80% to 90%, this risk is much lower for fraternal twins.

In May 2010, Wakefield lost his medical licence for Great Britain due to inappropriate conduct. The General Medical Council did not review the scientific basis for his research, but its realization. One issue was that Wakefield e.g. included a blood sample obtained from friends of his son's on the occasion of his son's birthday party, and of also having made payments for the samples. The Council stated this was not in accordance with an appropriate conduct and caused damage to the medical profession.

Wakefield migrated to the USA where he founded a non-profit autism center in 2005. Despite the occupational ban in Great Britain he can practise medicine legally in the USA.[6].