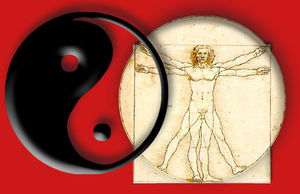 Edzard Ernst, retired Professor of Complementary Medicine at the University of Exeter, England, argues that the term "Complementary and Alternative Medicine" ("CAM") is an almost nonsensical umbrella term, and distinctions between its modalities must be made. All treatments, whether "mainstream" or "alternative", ought to be held to standards of the scientific method. The evidence-based medicine is an ideal state which has not yet been achieved by either current mainstream or alternative medicine. Ernst characterizes the evidence for many alternative techniques as weak, nonexistent, or negative, but states that some evidence exists for about 20 treatments, particularly certain herbs and acupuncture – although this evidence does not mean these treatments are mainstream, especially not worldwide.[4][5]

A National Center for Complementary and Alternative Medicine NCCAM in USA defines complementary and alternative therapies as treatments which are used in place of ("alternative") or together ("complementary") with conventional, established therapy.[6] A treatment is considered established when its clinical efficacy has been demonstrated in prospective, randomized trials or a biological rationale establishes the treatment as reasonable. In 2009, an Anglo-Australian group of researchers demonstrated with a computional model that for some odd reason those methods with little or no effect at all show a tendency to spread quickly.[7][8]

The terms alternative medicine and complementary medicine are therefore euphemisms, as they do not offer a real alternative and are just ineffective or less effective pseudomedical methods. This also applies to the "experience based medicine" which tries to invoke anecdotal cures instead of solid proof as a positive quality.[9] Almost all alternative treatments belong into the realm of pseudomedicine.

The concepts of alternative and complementary medicine are usually based on an axiom (a self-evident truth that requires no proof).[10][11]

CAM has turned into a big business, the worldwide turnover is estimated at more than 60 billion U.S. Dollars.[7]

The typical patient or customer, according to studies, can be characterized by the following attributes:[12]

For the popularity of offers outside of science-based medicine a variety of factors were identified.

People seeking alternative treatments were found to have had had a transformational experience that changed the person's worldview and often showed commitment to environmentalism, commitment to feminism, and interest in spirituality and personal growth psychology. One study found that dissatisfaction with conventional medicine did not predict use of alternative medicine. Only 4.4% of those surveyed reported relying primarily on alternative therapies. It concluded that people find these health care alternatives to be more congruent with their own values, beliefs, and philosophical orientations towards health and life.[12] Still, arguments like "alternative practitioners devote more time to patients than doctors" are frequently heard.

Other studies found that disappointments with and distrust of conventional therapies play a role. Many patients and clients find pleasure in the more or less explicit criticism of mainstream medicine" or "the pharmaceutical industry" which is not uncommon in alternative medicine circles. Often, an anti-scientific attitude is mixed with New Age mysticism. Vigorous marketing and extravagant claims create false hope. When people become sick, any promise of a cure is appealing.[15]

An appeal may also result from the typical features of pseudomedical treatments, such as simple, clear explanations for the alleged therapeutic effect or lack of side effects. In a study, Edzard Ernst showed this notion is wrong and side effects may indeed occur.[16]

In an interview with "The Independent", Ernst blames providers, clients, and the doctors whose neglect, he says, has created the opening into which alternative therapists have stepped:

"People are told lies. There are 40 million websites and 39.9 million tell lies, sometimes outrageous lies. They mislead cancer patients, who are encouraged not only to pay their last penny but to be treated with something that shortens their lives. "At the same time, people are gullible. It needs gullibility for the industry to succeed. It doesn't make me popular with the public, but it's the truth."[17]

Another estimate valued the total turnover at about 20% of the entire so-called Wellness industry in Germany, which has an annual volume of 50 billion Euro.[21]

A 2008 survey of US hospitals by Health Forum, a subsidiary of the American Hospital Association, found that more than 37% of responding hospitals indicated they offer one or more alternative medicine therapies, up from 26.5% in 2005. More than 70% of the hospitals offering CAM were in urban areas.[22]

The National Health Statistic Report in an article dated July 30, 2009[23] states that U.S patients have spent 33.9 billion Dollars on CAM services and products in 2007. Homoeopathy accounted for 3 billions, Qigong for 4 billions. Expenditure for food supplements like vitamins and minerals were not included in this amount.[24] In 1997, between 36 and 47  billion U.S. Dollars were spent on complementary medicine. Of these, 12 to 20 billion USD were paid by patients for complementary therapists.[25] This is half of the amount spent by patients on medical services.

A study found that 27 billion dollars were spent on complementary and alternative medical treatments by consumers in 2002.[26] A further study found that, in 1987, four times as much money was spent in the USA on complementary medicine than on all cancer research.[27] In 1981 Laetrile, a then popular ineffective, alternative cancer drug made from apricot kernels had a turnover of 2 billion U.S. dollars. In the same period 0.2 billion dollars were spent on chemotherapy.

In Germany, funding for research in the field of alternative medicine usually comes from private foundations, such as:

The manufacturers of alternative medical products are also funding research in this field. German companies Bionorica and Schwabe have research budgets of 17 and 25 million Euro. While it is not possible to patent substances that occur in nature (such as plants), special techniques for preparation can be patented.

Since 1999, the National Center for Complementary and Alternative Medicine (NCCAM) has funded research on alternative medicine with 2,5 billion U.S. Dollars.

The National Center for Complementary and Alternative Medicine in USA has an annual budget of 122 million dollars, financed by the government, and spent $2.5 billion on studies of CAM therapies.[28][29] The NCCAM budget has been criticized because despite the duration and intensity of studies, there have been exactly zero effective CAM treatments supported by scientific evidence to date.[30][31] R. Barker Bausell, a research methods expert and author of "Snake Oil Science" states that "it's become politically correct to investigate nonsense."[32]

Wallace Sampson, an editor of Scientific Review of Alternative Medicine and a Stanford University professor of medicine, comments CAM is the "propagation of the absurd" based on the example that alternative and complementary have been substituted for dubious and implausible quackery.

As far as effectiveness is concerned, users of alternative medical methods often only refer to their own experience which is based on a selective perception of the past. Such retrospective observations are not evident by nature. The argument used occasionally, "He who heals is right", is not sensible because causality and correlation are often confused in anecdotal experience and reports. In other words, an illness treated with globules might just as well have gone away by itself.

The notion of a postulated and fuzzy phrased "holistic approach" (usually associated with "of body, mind and soul") remains a mere promise within alternative medicine and would be difficult to implement because of time and financial constraints.

A study by the Royal Children's Hospital in Melbourne published in December 2010 investigated 39 cases in which children suffered damage fpllowing alternative medical treatments. In 30 cases, a correlation between damage to the patients and use of alternative medical therapies or denial of prescribed medicines was established. Four of the children died because their parents refused medical treatment. An malnourished infant of eight months died of septic shock because he had been put on a diet of "naturopathic" rice milk due to an alleged constipation since his third month of life. A baby of ten months also died of septic shock because he was put on a restrictive diet against a chronic eczema. Another child died from multiple epileptic seizures after parents had stopped the anti-epileptic drug medication for fear of side effects, using an alternative remedy instead. A fourth child suffered fatal bleeding because the parents refused a therapy with anticoagulants in favour of a complementary medical treatment.[37][38]

Intimidation and actions against critics

Individuals or institutions with a critical view of alternative medicine pointing out its pseudo-medicalcharacter must expect personal attacks. Two women who asked critical questions of the lecturer at an event on Germanic New Medicine in Frankfurt, Germany were "accompanied home" by "bald-headed gentlemen". The two women had to call the police. A cellular therapist tried to stop a critic with a court order and from giving his assessment of cellular therapy.[39] A further example are civil actions against the former project Paralexx which led to a temporary shutdown.

The German consumer protection foundation "Stiftung Warentest" wanted to publish a book with a critical analysis and evaluation of natural and alternative medicine. The magazine "Stern" seized the opportunity to do a prior publication: Krista Federspiel, one of the two authors and her colleague Hans Weiss offered to do a undercover report visiting ten alternative practicians to obtain a diagnosis. "Stern" offered generous payment for the report and requested a second part presenting victims of alternative methods by name. To prove the journalists had indeed seen these alternative practicians, a photographer documented the visits. Each prcitioner attended imputed the subject with several diseases: A total of 38 different diseases and a myriad of ailments and allergies were diagnosed, and more than 130 drugs prescribed. When the report titled "Wunderheiler und Krankbeter" (Miracle Healers and Faith Un-Healers) was published in "Stern" 49/1991, the criticism raised was met by outrage and massive protests by alternative practitioners to such an extent that editors postponed and later cancelled the second part, fearing the loss of readers. The rights were returned to the authors.[40]

In a show aired by German TV station ZDF on September 5, 2007 titled "Heilen mit dem Nichts?"(Healing with nothing?), journalist Joachim Bublath reported about scientific results on homoeopathy (including an analysis of the renowned journal The Lancet[41]) which questioned a possible effectiveness of this controversial method beyond placebos. This led to a call from advocates of homoeopathy to spam the station's website and ZDF shied away by deleting the site citing the Lancet figures.[42][43]