Pseudomedicine is a term for treatments that claim to be working concepts of medicine that either have no objectively verifiable benefit or are incompatible with the current state of knowledge in the field of science based medicine (evidence based medicine, EBM). Pseudomedical methods often present themselves as established treatments, usually using or misusing terms from scientific medicine and the sciences. They are the pseudosciences of medicine. Pseudomedicine is often used as a synonym for Quackery, the "fraudulent or ignorant pretense to medical skill". It is a shortening of the 17th century word quacksalver which originates from the Dutch kwakzalver("hawker of salve"). The quacksalvers sold their wares on the market shouting in a loud voice.

Evidence based medicine employs some treatments too where it is not known in detail, why or how they work, but effectiveness is reproducible. Such treatments are not counted as pseudomedicine.

The term pseudomedicine overlaps partially with the terms Alternative medicine and Complementary Medicine, which are used by supporters of pseudomedical treatments, as well as its critics as a synonym for pseudomedicine. Pseudomedical practitioners on the other hand often refer to the science based medicine – derogatory – as orthodox medicine.

Pseudomedical treatments can often be identified by the following characteristics:

A great number of pseudoscientific treatments and diagnostic procedures is listed in various categories at Psiram:

Many remedies use ingredients of natural origin. Among those plants about 350 protected species are found. Examples are:

Trade with these plants or with preparations of them is only permitted under special control of the organisation CITES(Convention on International Trade in Endangered Species of Wild Fauna and Flora).[1]

Through intensive harvesting for international commercial use many plant species are ruthlessly exploited and thus threatened by extinction today.[2] At the same time, proof of effectiveness is the often weak or nonexistent.[3] 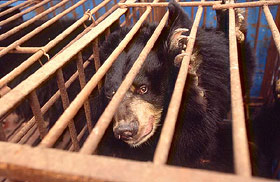 Asian black bears held captive for the extraction of bile

Some reagents, that are used in pseudomedical methods (especially of far eastern origin) come from the hunt of animals threatened by extinction or that are otherwise legally protected.[4]

Used are for example tiger bone or rhino horn or even sea horse to increase the virility.[5][6]. Poaching on these species because of the attributed effects of the reagent endangers many species in a pointless way. A further example is the massive catch of sharks or sea horses to win shark cartilage for "medical" purposes, which brought several species to the brink of extinction.

Ursodeoxycholic acid is a reagent still won in Traditional chinese medicine from the bile of living Asian black bears, which are implanted with a permanent cannula to "tap" the animals on a daily basis. It is an unimaginable cruelty to these animals, which are held in small cages on so called bear farms. The medically useful substance ursodeoxycholic acid for liver diseases can be created purely synthetic for a long time now. Nevertheless, many customers prefer the animal derived variant.