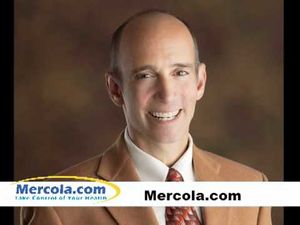 Joseph Mercola (born July 8, 1954) is a US-American osteopathic physician, businessman, author, and founder of the alternative medicine-website mercola.com which markets and sells his health-related products. He is also an anti-vaccinationist, HIV/aids-denialist, an outspoken critic of FDA and critic of mainstream medicine, especially regarding the use of prescription drugs. His business practices are regarded as dubious by various sources, and he received several warnings by FDA for violating the law by advertising products using false and exaggerated claims. He is criticized for applying snake-oil vendors' methods, promising expensive products free of charge and scaring visitors of his website into buying his products with his articles.[2][3]

Mercola graduated from University of Illinois in 1976 and from Chicago College of Osteopathic Medicine in 1982.[4] He started his website Mercola.com in 1997 which, according to Mercola himself, has become the most frequently visited natural health website today with over 1.5 million subscribers. Mercola wrote several books. Two of them, The No-Grain Diet and The Great Bird Flu Hoax, made it to the New York Times bestsellers list.

Mercola is a member of right-wing, ultra-conservative Association of American Physicians and Surgeons which condems such alleged evils as abortion, vaccination, and evolution. AAPS further denies that mankind causes global warming, that HIV causes AIDS[5], and claims a "gay male lifestyle" reduces life expectancy by 20 years[6], to give just a few examples. It publishes a journal which is neither peer-reviewed nor regarded as "scientific" in the first place.[7] Quackwatch lists it as an untrustworthy non-recommended periodical.[8]

Mercola also promotes the dangerous Germanic New Medicine of racist Ryke Geerd Hamer as a "new view of cancer" on his website. In an article dated 2007, he claimed Hamer was "persecuted and harassed by German and French authorities" when attempting to publicize his findings. The total number of victims of Hamer's method in and outside of Germany exceeds 140 (as of 2007). Eleven patients died in Italy only. And not even one case of a successful cancer treatment according to the principles of New Medicine has been documented so far.[9]

He also promotes the Sodium Bicarbonate Therapy according to Tullio Simoncini which must be considered one of the most ineffective and absurd methods claiming to cure cancer patients. Simoncini believes that cancer was a fungus and that it can be cured with baking soda.[10]

Mercola claims that vaccines are dangerous[11][12] because they were full of toxins and that they were produced from aborted human fetuses:

Most people are unaware that human cell cultures derived from aborted human fetuses have been used extensively in vaccine production for decades. And vaccine makers are happy that most of the public has remained ignorant of this fact, as awareness of it could blow up in their faces.[13]

This claim of course is utter nonsense.[14]

In his book "The Great Bird Flu Hoax", Mercola claims the warnings about H1N1 flu were just false alarms and that swine flu was quite harmless. He contends it can be avoided by some simple measures, like optimizing vitamin D levels, avoiding sugar and processed food, the use of krill oil, the use of all-natural antibiotics like olive leaf extract and oil of oregano.[15] Mercola happens to sell all these products through his website. Swine flu, however, is not harmless; the World Health Organization confirmed more than 18,000 casualties caused by H1N1 until August 2010.[16]

Mercola basically advocates a so called Paleolithic diet, consisting mostly of unprocessed foods. He recommends the use of coconut oil[17][18][19], and to avoid most fish (due to mercury content), grain, trans fats, artificial sweeteners, sugar, and pasteurized/homogenized milk. He advises persons with elevated insulin levels (such as diabetics) to avoid all grain products, fruit juices (including fresh-squeezed fruit juices), and canned, packaged or artificial foods.

His dietary advice is criticized, as for example studies proved grain my have a protective effect against type 1 diabetes and a whole-grain diet strongly protects against type 2 diabetes.[20][21]

The American Heart Association states that saturated fats like coconut oil contribute to heart disease and recommends to limit their ingestion[22], a position which is supported by science[23]

Mercola's claims regarding homogenized milk have been called "tenuous and implausible" by the American Medical Association.

Mercola argues against the use of microwave ovens and claims they were hazardous[24]. Instead, he recommends buying his "Aroma's Turbo Oven" which, as he claims, miraculously protects the nutritional values of food.[25] Various scientific papers proved such claims absolutely unfounded. Due to the short heating periods in microwave ovens, nutrient content is actually preserved and not destroyed.[26][27]

Mercola promotes various pseudoscientific ideas on his website, so e.g. that HIV was not the cause for AIDS[28], that sunscreen increases the likelihood of skin cancer[29], and that prescription drugs were harmful and should be avoided[30][31]

Mercola also claims medicine kills more people than it saves, in a series of articles titled Death by Medicine.[32][33] Among the authors of the series Death by Medicine are dubious writers like Gary Null (dubious credentials and products) and Carolyn Dean (had her registration certificate revoked because of "disgraceful, dishonourable and unprofessional conduct" in 1995).[34][35] The articles are full of pseudoscience, false claims, and fallacies.[36]