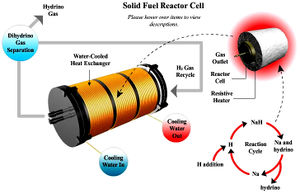 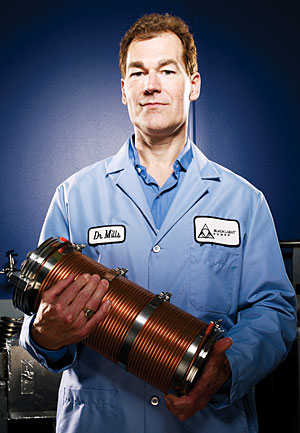 Hydrino is the term applied to an invention of US-American physician and electrical engineer Randell Mills (born in 1957). Mills coined this term to identify a hypothetic variant of the hydrogen atom whose electrons are brought onto an even lower orbit. Physicists criticize the theory of hydrinos as pseudoscience[1][2][3][4] and reject it as "blatant nonsense".[5]

Supporters claim the theory was going to play a role in the development of heating systems and future rocket drives. American NASA, however, did not express an interest.

A company by the name of "BlackLight Power"[6] is known as a supplier of hydrino technology. BlackLight Power was founded by Mills in 1991 under the name of "HydroCatalysis Inc." and operates in Cranbury, New Jersey.[5] The company is funded by assets from investors and not by sales of products or licences. By 2000 Mills had raised $25 million in funding, by 2009 the venture capital had increased to $60 million, by 2011 no known power generation has occurred. Time and again, BlackLight Power announced they were just months from a breakthrough of their technology which regularly resulted in the entry of new investors.[7] In 1997, BlackLight Power declared they were only six months from building a 100 kilowatt aggregate.

Why it’s a loser: Most experts don’t believe such lower states exist, and they say the experiments don’t present convincing evidence.[1]

Similar announcements are known of the companies [Felix Würth AG]] and Perendev-Group in Germany. Munich-based Perendev Group of Mike Brady is not available by phone any longer; involved persons defected to Switzerland, and Brady was arrested in his home in Wollerau (Switzerland) on March 29, 2010. Prior to this, charges had been filed since advance payments for alleged energy producing magnet generators had been embezzled.[8] In Switzerland, the company Raum-Quanten-Motoren AG (RQM) owned by one Hans Lehner likewise tried to convince investors with a similar mode of operation. In Ireland, Steorn company has been trying to find investors for their "Orbo" technology which they claim will produce energy „in the near future“.

Blacklight has reported the production of excess energy when sodium hydride is heated in contact with Raney nickel catalyst (R-Ni).[9] An Andrea Rossi also claims to have invented an energy catalyzer based on cold fusion of nickel.

A chemical reaction is said to create the alleged hydrino. As a consequence of reducing the orbit, this hydrino atom (which remains hypothetical and has never been sighted as of yet) should emit energy into its environment, while at the same time be more stable than the original hydrogen atom due to the lower orbit. This, however, would be in contradiction to the findings of quantum physics[10], a fact accepted by Mills who nevertheless contends mainstream quantum physics should be replaced by his grand unified theory of classical quantum mechanics(GUT-CQM) which allegedly was compatible with the existence of hydrinos.[11] Mills refers to results of MIT engineer Hermann A. Haus from 1986.

According to Mills and BlackLight Power, hydrinos emitted energy in the form of ultraviolet light (known as black light) and there were 137 energy levels of the hydrogen atom below its ground state. They claim it was possible to produce between one to twohundred times more energy from hydrogen than with chemical combustion. A prototype of a generator was said to produce a heat capacity of 50 kws, and a fraction of this energy was sufficient to obtain hydrogen from water. If the allegations made by BlackLight Power were true, this would allow the construction of a perpetual motion. Such a device, however, violates the laws of thermodynamics.

The hydrino theory is very similar to the assumptions of Jacques Dufour und Jacques Foos from France who speak of a compressed hydrogen atom they call hydrex and which they link to a hypothetical cold fusion. Suggestions regarding how to produce a hydrex atom, however, differ from those refering to hydrinos. A hydrex allegedly forms in the presence of an intense electro-magnetic field.

BlackLight Power holds a patent for rendering the chemical bonds of hydrogen using imaging software. All other BLP patent claims in the US and the UK have been rejected. Blacklight tried to sue the United States Patent and Trademark Office (USPTO) upon rejection of some patents, but lost.[12]

Four patent applications in UK were refused by the UK Intellectual Property Office, BLP sued again and the rejection was overturned based on procedural errors in November 2008. The hearing officer of the UK patent office rejected the patents again in June 2009.[13]