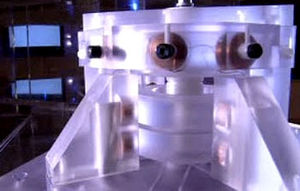 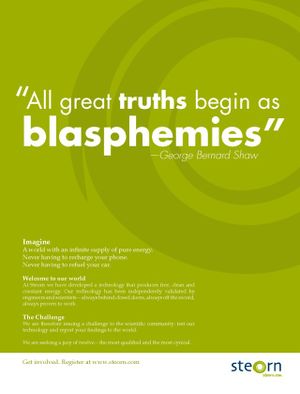 Steorn advertisement in The economist

Steorn Ltd. is a Dublin-based Irish company claiming to have built a perpetual motion device called "Orbo" which, contrary to the laws of physics, is said to be able to produce infinite energy.

In August 2006, Steorn raised attention with a widely noticed large scale advertisement placed in the English newspaper "The Economist"[1]. The ad claimed Steorn had developed a technology able to provide „free, clean and constant energy“[2] and were now asking scientists to investigate this technology and report results. According to the Economist's price list for advertisements, they spent about 125.000 Euro (£ 85.200) on that ad.

Several attempts to present a functioning Orbo-PM to the public failed. A group of scientists allowed to take a look at the device could not find evidence it was able to generate "energy from nothing".[3]

Steorn's claims regarding their „Orbo technologies“ contradict the first law of thermodynamics saying that energy will neither be generated nor used up in a closed system, but may only be transformed into another form of energy.[5] 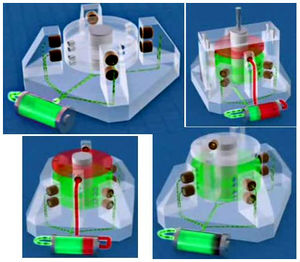 The miracle technology called "Steorn Orbo Technology" is said to base on a fictitious "time variant magneto-mechanical interaction"[6] and allegedly is able to provide "clean energy" for mobile sound systems and cars. It is claimed to be a so-called "overunity technology", which means it will generate more energy than its operation requires. Orbo is a registered brand.

In previous publications, Steorn affirmed they were able to generate energy by applying a time-dependent, magnetic viscosity, an effect only understood by Steorn as it were. According to Steorn, the fast convergence of two magnets used less energy than slowly pulling them apart later on, because the magnets thus did not have sufficient time to readjust their magnetic domains.

The eOrbo device presented in Dublin is said to draw pulsated electric current from a little battery and generate a magnetic field using small inductors which affect the attraction of rotating permanent magnets in different ways: During convergence attracting forces will maximize, while they will decrease during the phase of removal. A broken symmetry hypothesis had been drafted by one Tom Bearden previously.[7] The right moment to feed energy is said to be determined by a Reed contact. The rotation of permanent magnets at the same time will induce current in further conductors (according to Faraday's law of induction) which was said to be sufficient to charge the battery after rectification. The electric power output at the same time was said to be higher (overunity) than that necessary for operation, so that a change of battery was redundant. 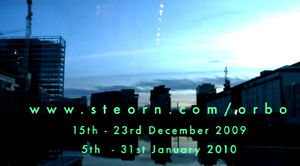 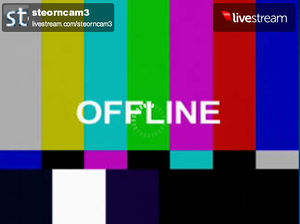 On July 4, 2007 an Orbo-unit was meant to be presented at London Kinetica Museum (Spitalfields Market). The public demonstration was postponed due to technical problems and eventually canceled. Steorn initially stated that heat emitted by spotlights had interfered with the device.[8] Later on they claimed the development of a „greenhouse effect“ within the model.[9][10]

Another demonstration scheduled for December 15, 2009 had been promoted in communications and video streams. The device was displayed at Dublin Waterways Visitor Centre, and three video streams were shown in the Internet (Links: [1] [2] [3]). The streams were interrupted several times. Also, cleaning personnel moved the demonstration engines out of sight to return them after completing cleaning operations.

The device was powered by a small rechargeable battery which was supposed to be recharged by operation and thus never discharge. Steorn even claimed the "Orbo 2009" model produced three times the energy it consumed. Surplus energy was said to be released as heat. The operating power was said to come from the magnets used (Orbo is a technology that creates energy from magnetic interactions.).[11] The demonstration was scheduled to last six weeks, with a break between December 24 and 4. January 4, 2010. There are no instruments registering outputs or inputs of electrical current visible in the videos. According to Steorn, giving a precise energy balance was not possible due to the "complexity" of the simple engine. Since it may not be excluded that the device was operated exclusively by the rechargable battery (1.2 Volt/10 Ah), the demonstration is not appropriate to prove Steorn's claims. Further information may be obtained only by an independent examination which e.g. monitored charging voltage and charging current of the battery (or of a large capacitor) over a longer period of time in order to establish the system's energy balance. According to Steorn, they were not prepared to consider the use of a capacitor as a buffer store instead of the rechargeable 10 Ah battery, since capacitors allegedly had „a delay in delivering current“.[12] In fact, capacitors are able to provide current without any delay.

Steorn selected a group of scientists forming a jury who were allowed to investigate the Orbo technology. It was headed by Ian MacDonald, professor emeritus of electrical engineering at the University of Alberta. In June 2009, they came to the unanimous verdict that Steorn had not been able to present evidence they in fact „produced“ energy as claimed.[13][3] Members of the jury had to sign an agreement of nondisclosure.

The advertisement in The Economist and the claims of Steorn received an echo in newspapers and blogs of several countries. Articles in scientific papers do not exist (March 2011). 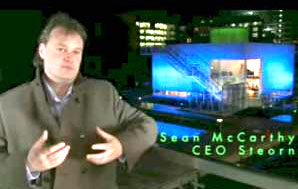 Steorn Ltd. was founded in Dublin in 2000 and is owned by Irishman Sean McCarthy (sometimes "Shaun David McCarthy"). As its business segment, Steorn claims to be a "leading Intellectual Property development company". In the past Steorn in fact operated as a "dot-com" in Internet business and provided expertise to prevent forgery and fraudulent use of cash cards and optical data storage devices. In October 2001, Steorn announced it was a "specialist service company providing programme management and technical assessment advice for European companies engaging in e-commerce projects". Steorn seemed to work at the development of micro generators which can harvest tiny amounts of energy from movement, e.g. for watches without battery. Later an USB Echosensor for measuring magnetic fields and a "Magnetic Torque Measurement System" (to measure pure torque of permanent magnets) were developed and marketed.

In 2006 Steorn allegedly earned 2,5 Million Euro through investors. Overall, Steorn is said to have received more than 8 Million Euro from investors, issueing company shares in return. Critics accused Steorn of only being a clever marketing company which employed claims to attract interest in order to win future customers.

Sean McCarthy resigned as secretary(director) of Steorn on Februar 14, 2011, the new board of directory consists of the main investors representing over 10 million in Steorn investments. A new company "The Steorn Orbo Trust" was founded on March 2, 2011 and officially registered on March 28.[14]

A patent for the Orbo technology was allegedly submitted by Steorn, but not granted to date (March 2011). Steorn does own several patents on magnetic measurement devices:[15]