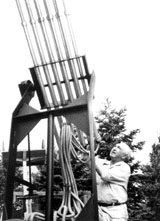 Wilhelm Reich and his Cloudbuster

Cloudbusters (also CB for short) are devices related to the late esoteric work of Austrian psychiatrist Wilhelm Reich. According to its proponents, it is possible to affect Reich's hypothetical orgones in the atmosphere with cloudbusters. They believe local weather could be changed, rain could be released in particular or clouds be affected up to a distance of several hundred kilometers. Since the chemtrail-hypothesis has become popular, cloudbusters were suggested by proponents of the hypothesis to "dilute" the alleged chemtrails. Cloudbusters also allegedly protect against harmful electromagnetic radiation and "mind control" with transmitters like HAARP.

Besides pseudoscientific invalid explanations, no information about a possible mechanism of action is provided. Only reports and anecdotes lacking scientific value are known regarding the alleged achievements of cloudbusters. American geographer James DeMeo is a current adherent of the cloudbuster hypothesis.

The extremist right esoteric Jessie Marsson is a stout advocate of cloud and chembusters and sells them commercially.

The first cloudbusters were built by Wilhelm Reich in the U.S. during the 1950s and must be seen in relation to his orgone accumulators. They allegedly draw "orgone energy", Reich postulated, from the atmosphere and dissipate it into earth. In recent years, instructions for building cloudbusters are being circulated in the internet which partly differ from Reich's constructions and are based on the ideas of American businessman and esoteric Don Croft, who claims he discovered the device by using a pendulum.

Principle of Building a Cloudbuster according to Manuals in Circulation

In principle, a cloudbuster of newer design consists of several long copper tubes which are mounted in a parallel way. At one end the tubes are directed to the sky, at the other end they are fixed to a container in which a two-component adhesive or polyester resin is mixed with iron or aluminum scrap. This substance is called orgonite. Crystals are added and connected to each tube.