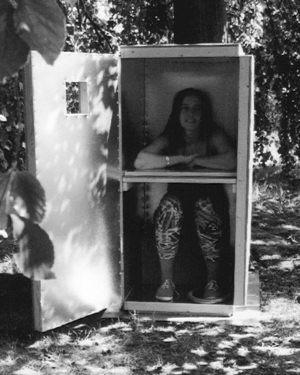 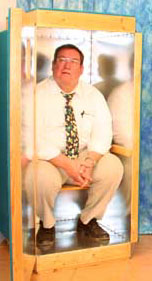 The orgone accumulator (ORAC) is an invention of Austrian psychiatrist Wilhelm Reich which he developed along with his orgone-hypothesis while residing in the United States approximately from 1939 on. The orgone accumulator is a device which will be used to passively collect a hypothetical orgone energy from its environment and concentrate it.

One provider of orgone accumulators is a company by the name of "Jürgen Fischer Orgontechnik" in the town of Bremervörde.[1] Jürgen Fischer offers orgone accumulators at four digit prices and claims he had received the exact building instructions in interviews with Wilhelm Reich. The conversation with the deceased Reich was allegedly realized with the assistance of a medium and in close cooperation with angels. Since his demise, Reich allegedly has been able to vastly improve the accumulator. The correct arrangement of eight rose quartzes in every corner is said to be essential - a construction Fischer claims to have protected as a utility model. In his book "Der Engel-Energie-Akkumulator nach Wilhelm Reich" (The Angel-Energy-Accumulator by Wilhelm Reich) Fischer does not only quote the late Reich, but also Archangel Raphael and Jesus Christ have their say.[2] 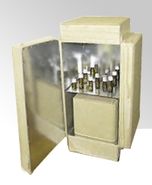 There are also similarly structured "Orgone-copystation" on sale which allegedly allow the transfer of "subtle medical information" from e.g. a homeopathic substance to another substance.

Although the devices were not properly licensed for medical use, Reich sold or leased hundreds of orgone accumulators to patients with the promise of healing. According to Food and Drug Administration FDA, this violated existing laws and led to an indictment against Reich.[3]

Several scientific studies were not able prove the existence of orgone or an efficacy of the orgone accumulator. It is therefore generally considered ineffective.