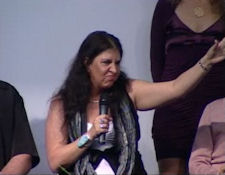 ThetaHealing is a pseudo-medical method of treatment and a registered trademark developed by US-citizen Vianna Stibal. It is a variant of DNA activation protected by trademarks under a variety of names. 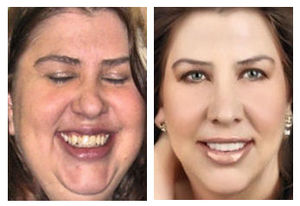 US-citizen Vianna Stibal, living in Idaho, alleges to have been diagnosed with bone cancer in one femur as well as with a malignant lymphoma in August 1995.[3] She claims to have had a life expectancy of a few months. Due to the tumour, her leg allegedly shrank by 7 to 20 cms; the actual figure varies in different videos and texts in which Stibal describes the effects.[4] However, she claims, creator spoke to her and by praying she sent healing powers into her leg which removed the tumour. Her leg allegedly regained its original length immediately.

As a matter of fact, Stibal was never diagnosed with cancer in the very first place, as is revealed by a screenshot of medical certificates presented by her in a video show.

In various videos, books, and other publications she presents a multitude of statements regarding the achievements of the Theta method. AIDS, cancer, fractures, parasite infestation, diabetes etc. can be healed according to Stibal, or have already been healed.[2] She also claims to have healed her car.[5]

In her book "Go up and Seek God" she claims the title of a "doctor of naturopathy". While this title is of doubtful nature in itself, and is not officially acknowledged in German speaking countries[6], Stibal never attended any institution assigning such a title, much less obtained a doctorate there.

Personal photos published on her website have been subject to an intense Photoshop finishing, as is revealed by a comparison of live shots to one of the pictures on her site.

By a short ritual similar to meditation and concentrating on thoughts and prayer, the electrical activity (expressed as EEG) of Theta and Gamma ranges is to be raised. In this condition, the intuition based on absolute love of god ("Creator Of All That Is") is said to be applied. “Mental disturbances” are to be eliminated by internal mental orders. As a consequence, the subconscious will obey this “order” immediately. This is allegedly effected by strongly formative characteristics of Theta and Gamma waves of the brain. Pains allegedly disappear spontaneously and behaviour patterns will be corrected.

The method allegedly is appropriate to cause changes on all four levels: physical, mental, emotional, and spiritual. Faith and feeling in turn are said to effect another four levels: quintessence, genes, history, and soul. Stibal specifies so-called poisonous emotions (“toxic emotion”) which were allegedly proven scientifically and, according to Stibal, were causing diseases.[7].

In this meditative condition, DNA activations are also to be accomplished which are said to bring about any result.

On her website, various courses for DNA activation can be booked. The courses take two to five days and cost between 500$ and 2,000$. Courses for instructors range from 1,000$ to 4,500$. Cheaper initial courses are mandatory. However, instructors will only be trained by Vianna Stibal in person.[8]

According to a BBC report, there are about 600 ThetaHealing operators in the United Kingdom. They demand between £30 for a telephone call and £400 for a course. A healer visited undercover claimed to have healed a child of cancer via telephone. In an interview, a former client expressed regret he spent £1,200 on a futile treatment, thus losing two years during which he could have been treated medically. When the BBC attempted to obtain a statement from Vianna Stibal, she refused to comment, while her husband attacked the camera operator.

In this report, Professor Edzard Ernst of the University of Exeter and a representative of an HIV foundation criticized ThetaHealing as nonsense, criminal, dangerous, and quackery.[9]

The books published by Vianna Stibal are characterised by poor grammar, are extremely defective, and are each nothing but a reorganization rehashing her basic material.[10]

On their UK-hosted webpage, publisher Hay House advertised their recent book with the claim of a cure for cancer. Subsequently, sceptics pressed charges against Hay House who had to withdraw the advertisement.[11]