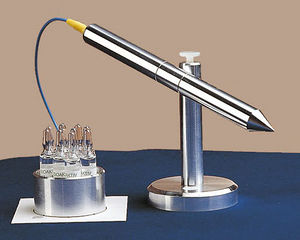 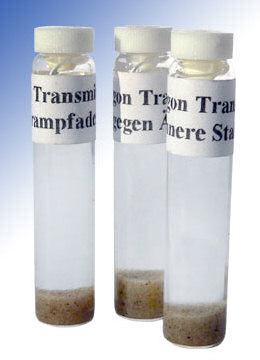 "Transmitter" for varicose veins and anxieties

An orgone radiator is an esoteric device which, analogous to an orgone accumulator, allegedly absorbs a hypothetical orgone energy proposed by psychiatrist Wilhelm Reich. Orgone energy is said to be absorbed from the environment and allowed to return it - as claimed e.g. in advertisements - "purified and refined" in a concentrated beam. In the opinion of supporters of the orgone hypothesis, orgone radiators will be useful for various physical and emotional problems. The classic design of the non-functional item is a one-sided sharpened rod. It will typically be a polished or plated metal bar, but there are also versions made of wood.

The radiator can be connected to a so called container cup with a single-pole cable, which is a block or a thick metal plate with holes for vials or other objects. The vials may e.g. contain homeopathic preparations, the alleged positive attributes will be sent out through the radiator as "energetic information". Photos or written messages can also be placed into such a cup. There are also "transmitter"-vials sold on the market which are claimed to contain "subtle information". There are transmitters for a variety of diseases and the increase of well-being as well as special transmitters for children (e.g. hyperactivity transmitter, learning materials transmitter), transmitters for animals, and so on.

In order to have the device working meticulously, instructions are given in manuals and esoteric literature. Thus, a thorough cleaning of the radiator with concentrated alcohol is required (the use of detergents is not recommended), the cable between radiator and cup must not form loops, the room has to be well ventilated etc.

According to proponents, orgone radiators cannot only be used to radiate "positive energy" on people, animals, and objects, but also to draw "negative energy" from them. They simply must be placed behind the radiator instead of in front of it. Advertisements often describe the alleged power of orgone radiation using the fantasy unit Bovis scale.

Manufactures and suppliers are: