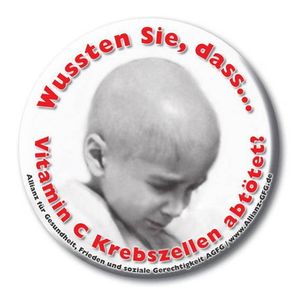 Rath spent millions in advertising to portray himself as a saviour of the world who is oppressed by pharmaceutical industry (which he happens to be part of, given the products sold!). Some of his products may indeed not be sold in Germany, because in some cases safety limits for vitamins in nutritional products were exceeded. These products therefore will not be regarded as dietary supplements (foods), but as pharmaceuticals and thus are subject to a market authorization. Studies proving the efficacy would have to be provided but could not be accomplished so far.

Rath came into conflict with South African law several times since he advised persons suffering from HIV/AIDS against antiretroviral therapies and instead recommended his own cellular medicine.

Cellular medicine as propagated by Rath has proved to be ineffective in scientific studies. In industrial nations like Germany, vitamin deficiency calling for treatment is a very rare problem and needs to be verified in order to justify a substitution of vitamins actually absent by vitamin-containing agents. Only in such cases the vitamins actually missing should be substituted. An overdose of vitamins may cause grave undesirable side-effects. This is especially the case with liposoluble vitamins. It was even established in big epidemiological studies that ingestion of vitamins and micronutrients leads to a decrease in life expectancy for cancer patients.[1][2].

Cellular medicine may been seen as Rath's interpretation of orthomolecular medicine (OM) which is based on the ideas of Linus Pauling.

Pauling himself has been criticized for making immoderate claims.[3] Rath's attempts to render some scientific semblance to his own vastly exaggerated claims, however, are obstructed by the fact that even Pauling's work does not support them. His employment with the Linus Pauling Institute ended in discord and he sued the institute for interfering with his business activities.[4] 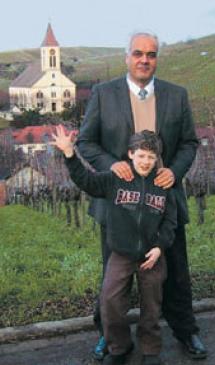 The case of Dominik Feld who developed a metastasizing bone tumor and died while being treated with cellular medicine was widely covered by German media. Rath had used the nine year old cancer patient as a sales promoter regarding the efficacy of his vitamin pills and declared him healed.[5] The parents, believing in Rath still today, had canceled their son's chemotherapy treatment in May 2003, and hoped for better healing prospects using Rath's compounds. They started treatment with micro-nutrients, the vitamin products of Dr. Rath. In September 2004, they finally took their son to a clinic for alternative medicine in Tijuana, Mexico which applies treatment according to Rath's methods. The nine-year-old boy died there on November 1, 2004.

Quickly, Rath placed several large-scale commercial advertisements claiming the boy did not die from cancer, but from coronary failure and malpractice - a "botch-up of orthodox medicine". The autopsy, however, established a big tumor in his chest which had applied pressure on lung and heart.[6][7][8]

Rath wrote about the death of Dominik Feld:[9]

"Now you are free, Dominik! Here on earth you were imprisoned, held on an island of the cancer-afflicted. Same as millions of cancer patients, you were chained by the bonds of the chemotherapy" 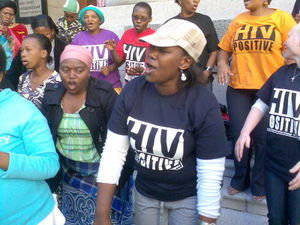 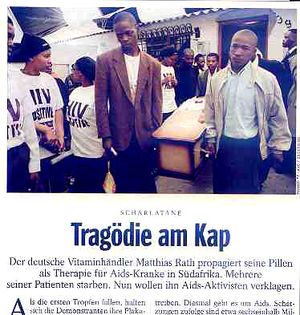 Rath and his foundation had to answer to a court in South Africa after they had raised false hopes with AIDS victims, discouraged them from antiretroviral therapy, and instead recommended his cellular medicine. Rath was also accused of conducting illegal experiments on humans.[10] The experiments were found to be in violation of South African law, judges stated in the case "TAC vs. Rath" on June 13, 2008 in Cape Town. The court ruled that Rath must not advertise his vitamin products as a cure for HIV/AIDS[11][12]

In March 2006, Rath was convicted of libel against the NRO TAC, Treatment Action Campain, in Cape Town.[13]

In an opening speech at the International AIDS vaccine conference in Cape Town in 2008, the newly appointed South African Health Minister Barbara Hogan left no doubt that AIDS is caused by HIV and must be fought with evidence-based medicine.[14]

1,000 persons are said to die from AIDS in South Africa every day. Hogan also promised to see to the prohibition of vitamin treatments of HIV positive persons. This refered to the business activities of Rath, amongst others, who had enforced advertising campaigns for his vitamin treatments in South Africa for years. Already in 2005, WHO and UNICEF had cautioned against this method of treating AIDS.[15][16][17]

This new South African Health policy ended a ten year era of HIV/AIDS denialism which was maintained by the former president Thabo Mbeki and his Minister of Health Manto Tshabalala-Msimang.[18][19][20] Tshabalala-Msimang became known as Dr. Garlic because she propagated treating AIDS patients with garlic, beetroot, and olive oil instead of antiretroviral pharmaceuticals.[21] When the new SA president Kgalema Motlanthe took office, he displaced Tshabalala-Msimang and transfered her to a less important position in his cabinet. AIDS activists celebrated this with a party in front of the parliament. Tshabalala-Msimang was blamed for having caused the death of hundreds of thousands of AIDS victims.

Aftermath: The rejection of effective AIDS therapies in South Africa has caused the avoidable death of 330,000 AIDS victims between 2000 and 2005.[22][23] According to a study published in the Journal of Acquired Immune Deficiency Syndromes, a further 35,000 newborns were infected because they were denied prophylaxis with Nevirapin.[24] In 2000, pharmaceutical company Boehringer Ingelheim offered to supply the medicament Nevirapin free of charge to avoid mother-child infection, but the offer was dismissed. Only two pilot projects were permitted. Furthermore, donations by the Global Fund to Fight AIDS, Tubercolosis and Malaria for the province KwaZulu Natal were blocked for more than a year according to Pride Chigwedere, who had treated HIV patients in Simbabwe prior to his occupation with the Harvard School of Public Health in Boston.

In 2009, a 1,000 kg shipment of Rath's vitamin pills was confiscated by the Department of Health in South Africa, and criminal proceedings were initiated.[25]

Rath as a politician

In June 2005, the Dr. Rath Health Foundation established a small political party by the name of Allianz für Gesundheit, Frieden und soziale Gerechtigkeit(Alliance for Health, Freedom and Social Justice) (AGFG) in Germany which is headed by Rath's PR manager Lutz Kliche. Rath used to be a vice chairman initially.

Core of the party platform are hypotheses of cellular medicine in combination with Rath's far-reaching conspiracy theories. He views the denial of admission for his products as proof of a so-called "Pharma Dictatorship" which controled politicians and scientists all over the world and acted as a puppet master. On his website and in leaflets, he contends "the pharma cartel declared war on health and life of the entire mankind". He further insinuates that "vitamins and other naturopathic medicines" were suppressed and defamed out of greed, to sell "ineffective drugs" which just treated the symptoms to earn more money at the expense of customers. Excerpts from professional articles, leaflets, and news items are presented in the way of ostensible proof.

This aggressive strategy was prohibited by court order in 1998. In the reasons for the judgment, the court of Berlin stated:

In a running campaign by his party AGFG started in 2006, Rath even warns against an imminent nuclear war which meant to establish a "Pharma Dictatorship".

He also applied an embarrassing comparison to the Holocaust: A statement by AGFG quotes a speech given by Rath, titled "Auschwitz wird zum Wendepunkt der Geschichte" (Auschwitz becomes a turning point in history). Rath refers to a visit at Auschwitz concentration camp and draws a comparison to a "pharma genocide":[26]

"Auschwitz ist nicht in der Vergangenheit abgeschlossen. Es dauert noch an. [...] Die grausamen Ereignisse in Auschwitz waren und sind nur ein Teil des größeren Zusammenhangs des weltweiten Pharma-Völkermordes!"
"Auschwitz was not completed in the past. It still goes on. [...] The horrible events in Auschwitz were and still are part of a greater context of a worldwide "pharma genocide".

In 2009, Rath tried to influence the Irish referendum on the new EU treaty. In a six-page-leaflet, Rath claimed that voting "yes" will result in the militarization of Europe, and would turn Ireland into an Orwellian police state. Europe was on its way to become fully controlled by Oil and Pharma cartels. The vitamin millionaire and pharmaceutical businessman Rath portrayed his own activities as those of a non-profit organization dedicated to improving human health through research, education and the defense of patients’ rights to choose natural health therapies.[27]

Rath was involved in a number of legal cases.