The US company Magniwork Inc. is selling plans of a non-functioning "magnetic generator" since early 2009 which allegedly creates energy to power the entire house out of nowhere. Further energy sources like oil, wind or sunlight are not required. They claim that a conspiracy of the big energy companies keeps the general public from knowing about this technology. The plans of the alleged generator are distributed by a large number of websites and advertised using Google Adwords. Magniwork also offers commissions for resellers.

However, it turns out that the device as laid out in the plans is nothing more than a so called Bedini circuit. This kind of Perpetual Motion device was invented by the hustler John Bedini from Idaho(USA). Since a Perpetual Motion device can never work according to the laws of thermodynamics[1], the claims basically must be viewed as a scam.

Magniwork promises a 60-Days-Full-Money-Back-Guarantee, but ignores actual requests by customers to return the money[2]

After several websites started to warn about the Magniwork scam, a number of alternative sites with different names like magnets4energy or magnet4power have appeared.[3][4]

The company "Magniwork Inc." neither has an address nor is it possible to determine the owners of the site. The website is registered anonymously and the domainholder is hidden. Payments for the worthless plans are handled through a company called Click Sales Inc ("Clickbank") in Boise(Idaho).[5]

Rumors in the internet contend that a shady East European scientist and entrepreneur by the name of Igor Dobreski and his accomplice Vojdan Vrcakovski are the fraudsters behind Magniwork.[6] 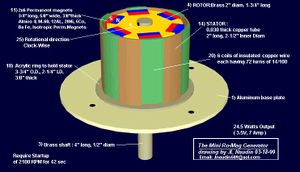 The plans can be ordered at 49 $ through several websites[7][8][9][10] (and more), and allegedly allow customers to build their own energy generator. After ordering the customer will receive a 57-page-document displaying a number of spelling errors. A thorough examination shows that the plans are based on the Perpetual Motion designs of John Bedini and were copied without changes from the website of Jean-Louis Naudin[11].

Assembly instructions are difficult to follow and do not show how the device is set in motion. The rest of the document provides conventional tips for saving energy which can be found on numerous websites and in several books.

Magniwork claims the device produces 24,5 Watt which is (even if it did work) not sufficient to even power a single light bulb.[12]

As functional principle a senseless pseudoscientific explanation is given:

This power source is not predicated on a continuous flow of energy but predicated on the consistency of the transmutation process of the magnetic molecular structures within the Earth’s pressure flow.