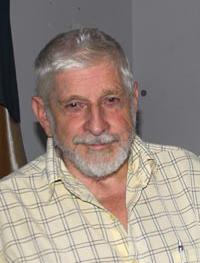 Jim Humble (aka Bishop James V. Humble) is a US-American engineer, author of (pre-transistor times) computer and mining technology manuals as well as the inventor of dietary supplements containing disinfectants which meanwhile have been banned in several countries. Humble, a medical layperson, tried to sell dietary supplements for several years. Since then, the self-proclaimed "bishop" also goes by the name of "James V. Humble". Humble founded his own religion and a church called "Genesis II Church of Health and Healing".

His whereabouts are currently not known for sure, he is most probably living in Mexico.

Humble claims that his invention, called Miracle Mineral Supplement (MMS or MMS1), was be the most effective medication around, being the ideal treatment for AIDS, hepatitis A, B and C, malaria, herpes, tuberculosis, most kinds of cancer, and many, many more.

He also offers MMS2, a product containing Calcium hydrochlorite. German mail order companies offer it as a "chemical for swimming pool disinfection". According to MMS2 advertisements, it is supposed to be administered internally in order to kill germs, viruses, and parasites. MMS2, same as MMS, was never officially approved as a medication.

Judging from current announcements and interviews, Humble apparently wants to have MMS tested in Haiti. Most recent announcements give reason to expect the worst for uninformed patients: He currently claims to "research" the treatment of MMS with cancer-, hepatitis-C- and AIDS patients. Quotation Humble:

We’ve started doing clinical trials for AIDS, Hepatitis C and Cancer and those trials have been going pretty good and we have a guy who’s head of the prison system there – he’s also helping us. And the local hospital has agreed to give us 300 blood tests for free.

Jim Humble has other persons spread the claim that he cured 100,000 malaria victims using the MMS-mixture invented by him. He also claims to have "advised" more than 2,000 people via phone and more than 4,000 people via internet.

Humble himself spreads the rumor that he is working on a mysterious "magnetohydrodynamic drive", a trivial garage door opener. 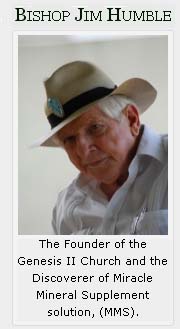 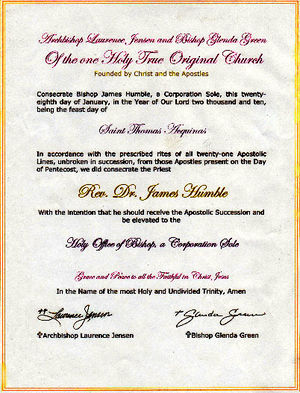 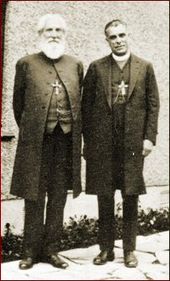 Since 2010 Jim Humble prefers to be addressed as "Bishop James V. Humble". Rev. Dr. Humble was "appointed" by an alleged archbishop Laurence (Larry) Jensen and his wife, the alleged bishop Glenda Green of a "One Holy True Original Church" from Arizona [2] which is also active as "Spiritis church", "Order of the Friends of Jeshua", "the Byzantine Catholic Church, Inc.", "the Liberal Catholic Church", "the Old Roman Catholic Church", "the American Orthodox Catholic Church", and so on.[3] The Original Church offers different pseudo-titles for the amount of 750 Dollars.[4] They claim a lineage of bishops dating back some 2,000 years. Their primary apostolic succession (that is lineage of bishoply consecrations) allegedly comes from the Catholic Church, via Union of Utrecht, Arnold Harris Matthew's British Orthodox Church and theosophical Liberal Catholic Church established by James Ingall Wedgwood, after breaking up with Matthew. Wedgwood had some trouble with British authorities because of his homosexualism, which at the time was penalised. A sex scandal weighed on the name of another Humble's direct predecessor and theosophist C. W. Leadbeater, who left the "Theosophical Society" after a pederasty scandal became public (see Gregory J. Tillett, "Charles Webster Leadbeater 1854-1934: A Biographical Study). The list of the bishop's predecessors:[1]

The main activity of this new religious MMS sect, which was founded in 2010, is less religious, but more in the way of "health and healing" as well as protection from vaccination. Humble:

To become a member of the church, one has to pay a 10 Dollar admission fee (shipment excluded) and assert to refuse vaccinations:

If you wish to have a church membership identification card with your picture that states that you must not be vaccinated, the cost is $10 to join.[5]

The money is transferred, via Paypal, to the Dominican Republic and Humble promises to put it in a church-owned account only known to him and his successor:

This is my personal PayPal account that is dedicated to the church. I will take the money out of this account periodically and deposit it in an account that no one knows that is known only to me and my successor and it will soon be recorded as church property and known to the church.

I was ordained in the lineage of Bishops traced all the way back to Christ. Actually, the apostles were Bishops, and they were given the power to create Churches and other Bishops by Christ. All Bishops have had the power to create new Churches if they wished and to write the Articles of Association and Articles of Faith, and Creed of the Church. My name has been placed in the lineage.

Regarding the name of his "church", Humble says:

The Genesis II "church" claims connections to good lawyers. Becoming a member is said to result in quite some advantages: for example, one may be appointed a priest by the "church" and add the title of a "Reverend" to one's name, and even hope for tax exemptions and monetary income. As a "pastor", one will hand out MMS-bottles for free but at the same time demand donations. The income made from donations is said to be higher than amounts from regular sales: ..We already have tremendous lawyers who will help us....If you wish, you will receive a pastor’s certificate and you will have the legal right to use Reverend in front of your name. It will be legal for you to not pay income tax. You can also receive a certificate to start a chapter of our church right there in your area. You can hand out tracts telling about MMS and our healing and you will no doubt have people come to you for healing. It will be best not to charge for your service, instead ask for donations after they get well, and that usually takes only a few days. Most people will want to donate something when they get well. You will make more money that way than selling the bottles of MMS. If you keep at it you should soon have enough to start building a Church. Our course teaches you how to handle all diseases and health problems except those needing surgery which is a small number...We expect a reasonable donation but not great big either, but of course, great big is OK. 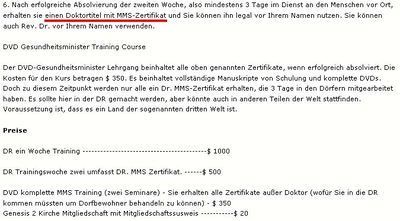 By now, Humble offers MMS-courses and fantasy titles in the Dominican Republic. Within a week and after a payment of 750 Dollars, one can become a "Minister of Health" and put an "MH" behind one's name. Church members can also put a "rev" in front of their name. For additional 250 Dollars, one can also take a course to learn how to treat sick persons with MMS. These courses are held in the earthquake-struck and heavily damaged Haiti which neighbors the Dominican Republic, and are part of a Genesis II Mission to Haiti. After a minimum of 3 days servicing persons on-site and after payment of 1,500 Dollars, graduates of such courses will receive a pseudo doctor's degree with a useless "MMS certificate", asserting this allows to legally bear the title of a "Rev. Dr.", which is wrong.

Special members even have the chance to become "bishop" of the "G2-church" themselves.