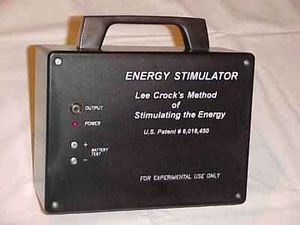 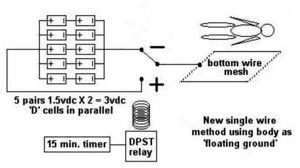 The Energy Cleaner by Crock (also energy stimulator or MexiStim) is a battery operated pseudomedical and patented[1] apparatus devised by U.S. inventor Leander E. "Lee" Crock (1925-March 26, 2010) from Ohio. The device is largely unknown in German-speaking countries, but is being advertised in the internet by Bavarian electrical engineer and activist Matt White. Literature on the method is unknown. Only esoteric journal NEXUS Magazine took interest in the concept in an article in 2003.[2]

The Energy Cleaner is a very simple device. It contains ten batteries which yield a voltage of 3 to 4,5 Volt through parallel and serial connection. It is sometimes recommended to use only cheap and now superseded alkaline zinc-carbon batteries, while other vendors (e.g. MexiStim) claim the type of battery does not matter and even a mains supply unit may be used. The voltage is applied to surface electrodes made of a mesh of wire or conductive plastic sheet and brought close to the body surface; according to the patent a distance of 5 cm to 30 cm is favourable. In some devices (MexiStim Polarity Cycler), an internal switch changes the polarity every 15 minutes. With older devices, users had to switch the clips on the electrodes in regular intervals. This was said to alternately charge and discharge the cells and "restore" the "electrical system of the body" closely related to the aura. A single treatment takes between one and twelve hours.

Although the method may be called primitive, its inventor claims it will improve all kinds of diseases from different areas of medicine. Anecdotally mentioned e.g. are cancer, Alzheimer's disease, hearing loss, viral infections, epilepsy or heart disease. Crock also claimed the application led to a detoxification of alleged pollutants from the body. The only side effect was frequent urination, but this obviously is due to the recommendation to drink more water than usual in order to "purge the toxins".

Healing properties are claimed to be confirmed using the non-scientific method of Aura photography, therefore the method is also called Auratherapy by its supporters.

Crock claims to have treated more than 10,000 persons with his device during three years. His offering of healing services in a 30-bed "clinic" led to trial for illegal practice of medicine. He had to rename his treatment facility from "Therapeutic Clinic" to "Therapeutic Academy". Finally, he called his company "EDK University" in Williamstown[3]. The website of this "university" is no longer registered.[4] As an appetizer, customers only had to pay when they felt better. Crock offered the possibility to test the apparatus for one month. The total amount of $ 3,000 (shipment excluded) was refunded if the customer decided to return the device. The monies earned allegedly were used to heal patients for free in his 30-bed "clinic".