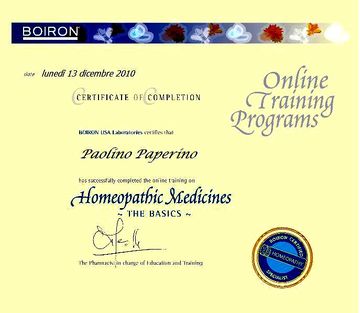 French pharmaceutical company Boiron is the world largest manufacturer of homeopathic products. Branches of the listed company exist in 59 countries. However, Boiron has no presence in German speaking countries.

In 2009, Boiron had a turnover of 526 million Euros (91 million Euros profit) with a slight decrease to 520 million Euros in 2010. In 2010, turnover in France amounted to 279 million Euros and Boiron employed a workforce of 4,081 persons. The majority of shares is held by the Boiron family, the general manager and the chairman of the board of directors are members of this family as well. Boiron spent about 128 million Euro on marketing in 2010 but only 6.3 million on research (pharmaceutical companies in general spend around twice as much on marketing than on research) - a ratio of 20 to 1.[1]

In June 2005 Dolisos Laboratories, another manufacturer of homeopathic products, was bought by Boiron.

The actual founder was Parisian pharmacist and homeopathic adherent René Baudry, who founded the "Pharmacie générale homéopathique française" in Paris (boulevard Malesherbes 68, 8. arrondissement of Paris) in 1911. In 1922, Baudry sold his business and founded a "Laboratoire central homéopathique rhodanien" in Lyon.

The brothers Jean und Henri Boiron (both pharmacists) contacted Baudry later and were employed by him. In 1932, the Boiron brothers founded the "Laboratoire central homéopathique de France" at the aforementioned address which later became the "Laboratoires Homéopathiques Modernes" (LHM).

The Boiron-Group was formed in 1967 by a union of several homeopathic manufacturers. The company went public in 1987 (Lyon). Boiron took over several other pharmaceutical companies during the following years.

One of the best known products of Boiron is Oscillococcinum (Oscillo), a milk sugar concoction which allegedly is effective against influenza. The name is derived from a presumption of French physician Joseph Roy (1891–1978) who, during a flu epidemic in 1917, believed to have observed the bacterial genus Oscillococcus in the blood of diseased patients. Oscillococcinum C200 is the best-selling homeopathic product in the U.S. It is also called "the $20-million duck" there. Annual turnover of the product is $ 20 million. The compound is produced from duck liver, but only a single duck liver is needed for the entire turnover - and even from this one liver, the best part will go wasted: The potency C200 means the ratio of liver to solution is 1 to a number with 400 zeros.[3] For comparison: The whole universe including earth consists of about 10 to the power of 78 particles. Ingredients of Oscillococcinum:

Efficacy of Oscillococcinum against influenza is not proven scientifically. A Cochrane review found seven studies on the subject and came to the conclusion that only two of them can be evaluated and no evidence of efficacy could be established:

The review, however, concluded that further research was warranted. It was criticized heavily for this conclusion and was withdrawn eventually.[5][6]

In August 2011 a class action complaint was filed in California:

"Oscillococcinum(the "Oscillo") is nothing more than a sugar pill that Defendants falsely advertise has the ability to cure the flu. In reality, Oscillo has no impact on the flu or any symptoms that accompany the flu."[7] 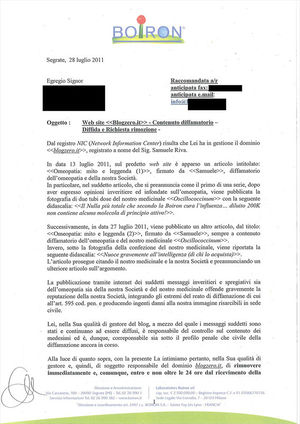 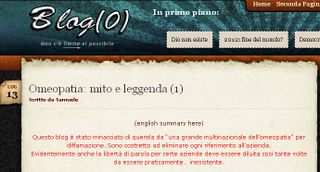 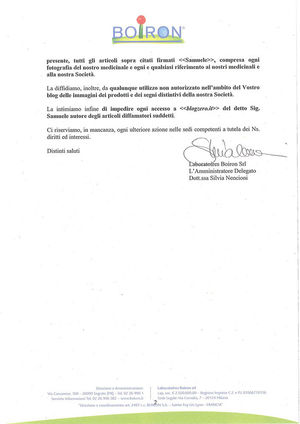 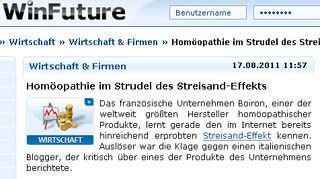 Attentive tracking of the thread and reactions to it in the internet ("Streisand Effekt") at "börsennews.de"[8]

The actions against Italian blogger Samuele Riva from Milan by multinational pharmaceutical company Boiron with a budget of millions seem to be an uneven fight matching David against Golitath. On July 13 and July 27 2011, the 28-year-old computer scientist added two ridiculing articles on homeopathy to his blog, titled "Homeopathy - myth and legend" (omeopatia mito e leggenda) (Article 1: [1] Article 2: [2]). The blogger also showed two pictures of Oscillococcinum with comments. According to the threatening letter of Boiron company, Riva added the following text below the pictures:

Boiron's Italian branch acted irritated and threatened a lawsuit because of libel. The blogger removed the pictures from the articles. According to the "British Medical Journal" (BMJ) which collected information about the lawsuit threat and contacted Boiron, Boiron employee Silvia Nencioni had approached the blog hoster on Juli 28 2011 and in writing asked them to remove all references to Boiron and block access to the articles. Otherwise Boiron would sue. According to Boiron, the statements in the articles were “untrue and derogatory both of homeopathy and [the] company,” and responsible for tarnishing the company’s reputation and causing "serious damage". The hoster refused to disclose address and identity of the blogger to Boiron, this information would only be disclosed to government agencies under certain circumstances. Riva commented on the lawsuit threat:

[...] When I was informed of the threatening letter, I removed the pictures and the direct references to the company and its products, while leaving the articles about homeopathy online. I also sent an email to the company telling them I had complied with their requests, but have not received a reply so far [...] (cited from BMJ)

Riva continues to document the progression of the lawsuit threat in his blog "blogzero.it" and also created a website in English, since the affair gained international attention: [3]. More than a hundred blogs and websites have reported about the lawsuit threat so far (as of Aug. 9, 2011). In his blog, Riva reports that said articles were read by less than 150 persons in the first 56 hours after publication. After the lawsuit threat, his blog now gets visited several thousand times per day (as of Aug. 9, 2011) [9]. A long and growing list of blogs support Riva meanwhile: List of supporters - further supporters can register there.

According to BMJ, Boiron is "monitoring all media including the web to see what is being said about our company".