Difference between revisions of "Conspiracy theory" 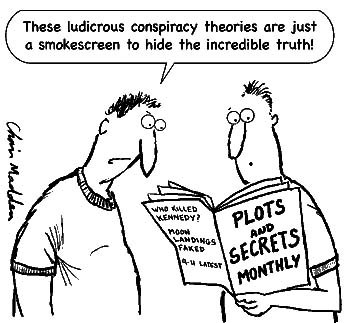 A conspiracy theory is the attempt to explain certain events, conditions or developments by a conspiracy, i.e. the goal-oriented, secret actions of a group of people towards an illegal or illegitimate purpose. Often the term conspiracy theory is used in a degrading or defaming manner regarding opinions which are seen as unfounded, irrational, remote, paranoid or ideologically closed. On the other hand it is often used by supporters of irrational convictions as the easiest explanation of their failures. Ryke Geerd Hamer (Germanic New Medicine) for example claims the existence of a world wide Jewish conspiracy aimed at keeping their alleged knowledge hidden from non-Jews.

Conspiracy theories are eagerly applied because they typically form self-contained systems of arguments. These are composed in a way which makes it hard to refute them (falsifiability). In the eyes of supporters of a conspiracy theory, non-believers are either part of the conspiracy, or simply not aware enough.

Conspiracy theories often contradict each other and can sometimes be refuted that way, or at least have some doubts cast on them.

Typical characteristcs of a conspiracy theory are:[1]