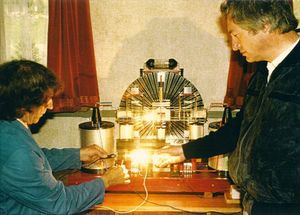 Paul Baumann with Testatika in 1984 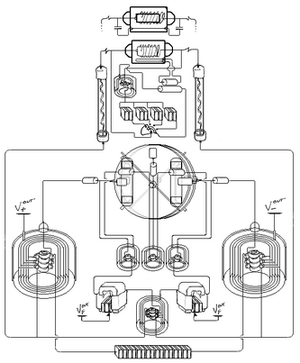 Testatika (also Thestatica, Thesta-Distatica or Swiss M-L converter) is a so-called free energy machine, invented by neoreligious cult Methernitha in Linden, Switzerland. The inventor is said to be a Paul Baumann. According to Methernitha it is a perpetual motion device able to produce electrical power of up to 7.5 kWs.

Methernitha community does not grant access to the Testatika device since allegedly mankind is not mature for such revolutionary innovations.

There is no serious evidence to support the claims. Furthermore, functioning replicas do not exist. As in fact Methernita community in Linden make use of their own conventional hydroelectric plant to supply them with electricity – instead of helping themselves to some free energy at no charge –, this demonstrates the inanity of Methernita's claims.

The Methernitha cult was founded by a Paul Baumann (born 1917) as a religious community in 1956, but in 1960 split into a fundamentally Christian denomination and an economically active cooperative. Cult members live according to their own interpretation of Christian principles and, based on a commitment, abstain from alcohol, tobacco, and further drugs. The majority of members live in Linden. Upon admission to the cult, new members must burn their books (except for the bible). External information is not permitted, neither newspapers nor radio or TV are tolerated. Methernita alternatively offers an internal TV net via monitors in every house owned by the community. Monitors are connected to a central studio which broadcasts „purged“ versions of worldly programmes, in particular soap operas. Contacts to outsiders are unwelcome, instead members are obliged to work as much as possible and to donate their entire property to community coffers.