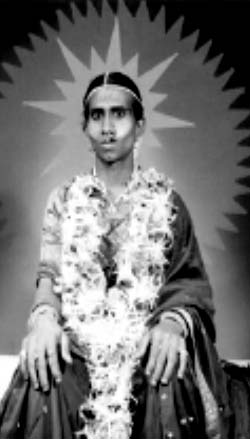 Prahlad Jani (Jay Ambe Prahaladbhai Maganlal Jani, or Chunriwala Mataji; also called "Mataji" by his followers; born August 13th, 1929) is an Indian fakir and, according to some sources, a follower of Jainism (*) or follower of the Hindu goddess Amba[1]) from Gujarat who claims not to have consumed beverages or usual food since he was eight years old (i.e. for 74 years as of 2010). Claims of this kind are known as Inedia. Jani himself believes in a miraculous gift from Indian goddess Amba Mata, and that he is fed a mysterious fluid called „Amrit" nectar through a „hole“ in his palate.

In June 2006, "Discovery Channel" aired a documentary about Jani ("The Boy with Divine Powers") which attracted international attention and interest in his case. Jani's case was also made public by Indian neurologist and Jainism follower Sudhir Vadilal Shah of Ahmedabad (chairman of All India Jain Doctors Federation)[2] and Immediate past-chairman, NJDF (National Jain Doctors Federation India) & Present International coordinator of JDF. The JDF association means to Promote scientific research and medical education based on principles of Jainism.[3] Shah participated in a group of physicians performing two examinations of the alleged abilities of Mr Jani in 2003 and 2010. The results of these examinations were interpreted by Shah in favour of his own hypothesis that the abilities of Jani were „scientifically inexplicable“ and an endorsement of his hypothesis about a possible autotrophic nutrition (photoautotrophism) in man, known only in plants and algae and not in humans. Shah does not exclude the possibility of a cosmic energy feeding Prahlad Jani.

No scientific publication on the 2003 experiment is known so far in scientific databases, while data for the 2010 experiment are only preliminary. The only source of data are statements in press conferences given by co-operating physicians which were spread in many newspaper articles and TV broadcasts worldwide. Another source is the private homepage of neurologist Sudhir Shah.

The Indian Rationalist Association (IRA) called Jani a "village fraud". This Indian association already debunked several "miracles" of alleged inedia in the past.[4]

Little is known about Jani/Mataji, and sources are limited to his entourage. He was born August 13th, 1929 in the Indian village of Charada (or Charod) in the district of Mehsana/Gujarat. According to a legend, he left his home at the age of seven and became a wandering sadhu. When he was eleven (according to other sources, eight), he had some sort of „supernatural experience“ which changed his life completely. He allegedly lost every desire for eating or drinking, and since then no defecation happened and he also no longer passed urine. Jani also is said never to have been ill, but in 1942 he apparently was admitted to Jaslok hospital for unknown reasons (apparently without his consent) where he stayed for 45 days. According to the aforementioned legend, he also stopped speaking and did not talk for 45 years (Maunbrat practice). Jani claims to experience a „Samadhi state" every day, filling him with light. An "Amrit nectar" fluid allegedly feeds him through a hole in his palate. According to Hindu texts, this liquid is considered a "drink of gods", causing the consuming person to become immortal. However, an MRT picture done in 2003 shows no such hole in his palate (see picture).

Prahlad Jani wears the dress of a devotee of the goddess Ambaji: a red sari-like garment. He wears a nose ring, bangles and crimson flowers in his hair.

In statements found on the internet and in newspaper articles, Jani is said to live in a cave near the Ambaji temple in the state of Gujarat (about 120 kilometres north of Ahmedabad). This allegation cannot be validated, however. In videos published on YouTube, Jani regularly gets presented in a house environment, often surrounded by followers (e.g. fanning him). Other videos show him in the „Sterling hospital“ in Ahmedabad. 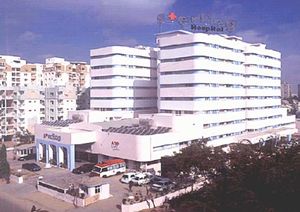 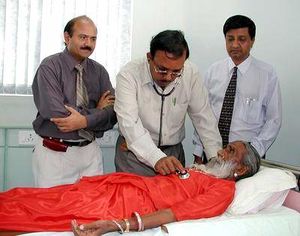 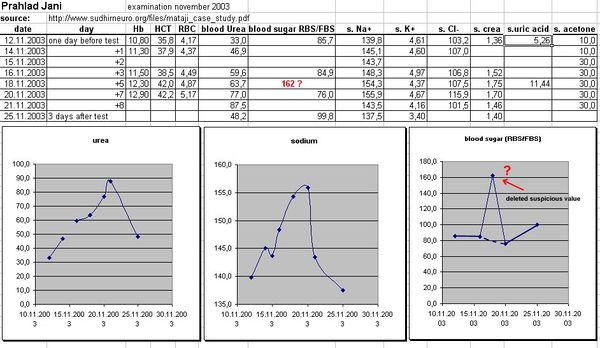 Some blood parameters during examination in November 2003 (source: Shah [1]) 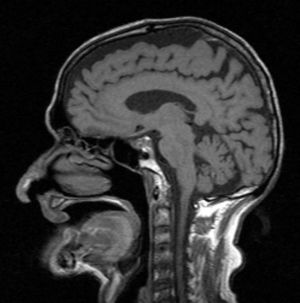 Normal MRT without pathologic signs, excluding any "hole" in the palate 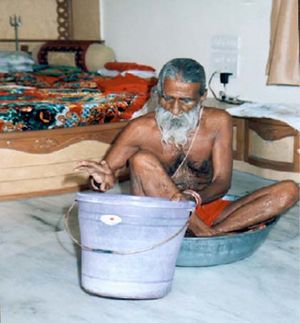 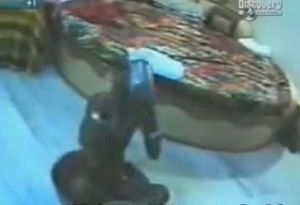 The alleged extraordinary abilities and claims of this Indian fakir of being able to live without any source of chemically bound energy and without water, were object of an examination in November 2003. No independent sceptic observers were allowed or invited to this experiment.[5] Jani was examined in the private "Sterling Hospital"[6] in the Western Indian town of Ahmedabad in the state of Gujarat during a period of nine days of supposed absence of food and drinking water. At the beginning, it was planned to check him over a seven day period in order to prolong the planned observation time without threatening his life. Sterling Hospital, however, refused any responsibility and refuted any payment in case of side effects. In the end, the state of Gujarat (i.e. the tax payers) guaranteed an insurance in case of side effects.

The examination started November 13th at 10 a.m. and ended November 22nd at 10 a.m.[7] (9 days). Jani was admitted to the intensive care department the first day. According to the panel of physicians performing the examination, his toilet was sealed for the next eight days and he stayed in a room with a glass door. He left that room twice per day for examinations (bladder sonography, MRT, etc.).

One of the physicians participating was the Ahmedabad neurologist Sudhir V. Shah who examined several similar cases in the past: Ellen Greve (Jasmuheen)[8] and Colcata engineer Hira Ratan Manek. There is no information available on Shah's examination of Greve/Jasmuheen. Ellen Greve also claimed „not to eat“, but she was seen eating several times, and this is confirmed by close associates of hers. A test performed together with Australian TV failed after five days of fasting and had to be stopped by the physician present. Hira Ratan Manek also claims never to eat. He travels around the world and often stays in Canada and USA for longer periods. Manek apparently makes a living on an income earned by sales of DVDs and lectures on the subject of inedia. However, like Jasmuheen, Manek has been caught eating several times and even was filmed in an Indian restaurant in San Francisco, a behaviour clearly betraying his followers who believe in his inedia. Neurologist Shah, who examined Manek, declared that he checked Manek's abilities and found no explanation for his alleged inedia. All examinations done by Sudhir Shah so far resulted in nothing else but a „success“ or „inexplicable facts“. Both Hira Ratan Manek and Jani are followers of Indian Jainism (Jani: probably *). The Indian Jain monk Sri Sahaj Muni Maharaj also claims that he did not eat over a period of one year (in 1995; only 211 days according to other sources). Fasting is an important issue in Jainism and it is common in India for Jains and Hindus, sometimes for up to eight days, without any adverse affects, as part of their religious worship.

According to the examining group of physicians, Jani could not eat or drink during that period and he had no defecation and passed no urine. Some urine was sonographically found in his bladder (about 0.1 litres, but when Jani was informed about it, the urine disappeared later). On an MRT picture, some stool can be seen. Part of the results of the examination remain secret. So e.g. no information regarding his body weight has been made public. Furthermore, at least one entry for blood sugar data was erased from a (private) website giving Jani's blood data.

According to private web pages reporting the 2003 examination, Prahlad Jani showed signs of being a „healthy man“, with the exception of a hearing loss. At a point in time close to the November 2003 examination (no specific date given), his heart rate was between 42-46 beats/minute, blood pressure was 114/80 mmHg (110/60 according to another source), and breathing frequency was 12-16 /min. Radiology showed stool and gas in the gut. Some urine was also found in his bladder which later vanished miraculously.

One of the main questions, that of body weight and changes in weight, remains a secret. We are told his weight either did not change, or only in the region of a few grams. On the other side, the blood samples taken also have a weight of several grams. On a private website publishing data of the 2003 examination, Jani's height (1.50 m) and a precise value of his BMI (16,89) are mentioned. These data allow the assumption of his body weight at 38,0 kg. The precise day these data were taken, however, is not known. On the other hand, according to neurologist Shah, Jani's body weight varied between 38 and 42 kg. But again, it is not known to which period of time this indication relates. A significant drop in body weight during a controlled period of real fasting is not compatible with claims of inedia. Such a drop in body weight is known from other cases, for instance in the case of German anthroposophist Michael Werner, leading to the conclusion that his claims of inedia are an illusion, not a fact. While fasting, Werner lost more than two kilogrammes in a week. Other fasting persons e.g. lost 6 kg over 10 days. Hira Ratan Manek even lost as much as 42 kg.

Some (if not all?) blood parameters obtained in the November 2003 examination of Jani are shown on the web pages of Sudhir Shah.[9][10] The values presented show an initial increase in serum urea, and then drop three days after the examination. The same is true for serum sodium, serum chloride, and serum potassium. Hematocrit is also increased. This is a clear sign of dehydration and hemoconcentration, compatible with a period of fasting and thirst. Blood sugar is decreasing, while serum acetone is increasing. This is also a sign of starvation. In the beginning and three days after the test, values are normal.

Instead of discussing such a fasting period as a very plausible cause of the blood values obtained, however, these are explained as amazing and declared a sort of medical miracle. In fact they show a normal behaviour of a subject, compatible with actual knowledge of physiology. Examiner Shah's words sound different: "We have reached a hypothesis which confirms that Jani's body has certainly undergone a biological transformation due to yogic kriyas. And he can control his inner organs' functions, which itself is intriguing."

In April 2010, a second examination was performed over an unknown period of time (perhaps 14 days), again at Sterling Hospital and again in co-operation with Sudhir Shah. Again, no external sceptic observer was allowed to participate. Psiram will update this article if new data will be made available.

In fact the data obtained clearly indicate that, after a period of habitual consumption of food and water, the test person was submitted to a period of fasting, and that data changed again when fasting was broken. The data obtained are completely in agreement with the state of actual knowledge in physiology.

On May 11th, 2010 James Randi offered in his video series "James Randi speaks" a test by the JREF and the corresponding 1 Mio. US-Dollar prize.[11]

Long lasting starvation leads to death. A healthy subject may survive 50 up to 60 days without food. Known hungerstrikers died after 50 to 60 days (example: Bobby Sands). Irishman Terence MacSwiney died of starvation after 74 days.

Every minute an adult will breathe in and out around 5 litres of air. After one day he will eliminate about one kilogramme of CO2, containing about 270 grams of carbon. A fasting subject will therefore lose 0.270 kg of carbon every day, 8 kg every month and 98 kg per year. That is more than the typical weight of an adult. CO2-concentration in the air is around 0.03%, much less than its concentration in the exhaled air (4%, relationship is 0.7%). Therefore, assimilation of carbon via respiration is not possible.

Humans lose water and water vapour via urine, stool, respiration and the skin (persperatio insensibilis). The amount lost every day depends on temperature and activity, and amounts to around 800 ml of water. At the same time, water is built up via oxidative processes (about 300 ml per day).