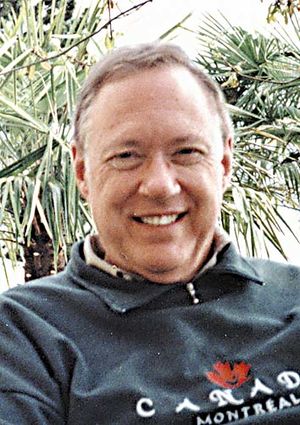 Lee Carroll is a US newager and author who has made appearances as a channel-medium for the spiritual being Kryon since 1992. After his exam in business economics at the California Western University in the 1950ies, Carroll founded a company for audiotechnics which he managed for 30 years.

During the following years, Carroll authored Newage literature. Since 1997, German issues of his books have been published in small Newage publishing houses like Ostergaard Verlag, which brought out the Kryon textbook serial[1], Koha Verlag [2], but also with Ullstein. In 1991 Carroll, together with US-citizen Jan Tober, ceated so-called Kryon-Lightgroups. Meanwhile both do events all over the world. 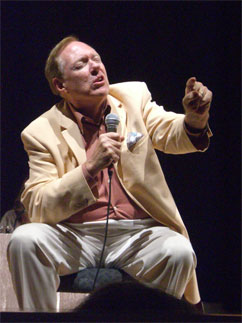 The Newage scene views Carroll as the creator of Kryon channelings. Sabine Sangitar Wenig, the foundress of Kryon school, in an interview claimed US-Newager Frank Alper (1930-2007) [2] was the first medium for Kryon and had initiated both her and Carroll into Kryon-Channeling. There is, however, no further evidence to support this this statement.

Kyron became an internationally known term in Newage circles through Carroll's books. He distributes his Kryon channelings through books, CDs, and videos (see also YouTube), does seminars all over the world, and makes regular appearances on larger Newage events and, in German speaking regions, participates in the congresses organised by Hamburg based Buchhandlung Wrage. Carroll is considered number one among protagonists of the Kryon cult, but acts in a jovial way towards other Kryon enunciators, although he actually excluded other Kryon mediums from Germany[3]. His performances at events are typical American stage shows. While channeling, he keeps flailing his arms as if he meant to shovel in cosmic energies.

During his channelings, human DNA is his favourite issue. However, this is not about scientific genetic research, but about changes in genetic material through supernatural cosmic energies which are supposed to take the entire planet Earth onto a higher level of consciousness, respectively transform it to a higher dimension. The „advancement“ of humankind into superhuman beings in a new era is to be seen as the target. This happens to be a prevalent pattern in the esoteric and New Age movements in order to explain the world and interprete the future in their own way.

In connection to the belief in reincarnation and karma, Carroll's channelings result in some dubious interpretations. In one of his texts, Carroll e.g. explains the sexually motivated murder of a child in a special way. [4]. Imagine someone is being tried for murder and explains to judge and jury they had agreed a contract with the victim in a former life, in which they committed themselves to torture and kill the other person, and the contract simply had to be fulfilled. Such views reveal a dangerous irrationality in esotericism.

Carroll and Tober gained attention within esoteric circles for their concept of Indigo Children set up in 1999. These children are said to be recognized by their blue aura. This term describes children with alleged special medial and spiritual abilities whose numbers allegedly have increased since the 1970ies. The invention of crystal children also is said to go back to Lee Carroll. The concept of indigo and crystal children meanwhile is spread by many authors and providers on the esoteric and psychic markets. Jan Udo Holey alias Jan van Helsing also took up the issue.[5]