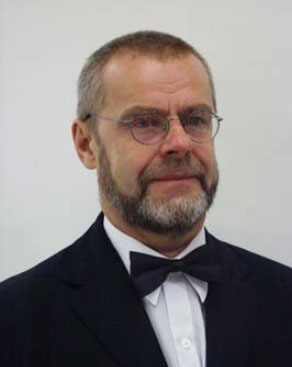 Iwan (Wanja) Götz (aka Esra Iwan Götz aka Wanja Sibirjak; born September 28, 1947, Nowosibirsk, Russia) is a German antisemitic holocaust denier living in Berlin and is part of the Germanic New Medicine-scene and KRR-scene. Götz is involved in the activities of the so-called kommissarische Reichsregierungen (KRR, Provisional Government of the German Reich) who deny the existence of the Federal Republic of Germany and believe in a persisting existence of the former Third Reich.

Own indications and statements

Inaugural address XI: I am not a Jew

According to Goetz's statements in the internet, his mother was deported to Siberia from Berlin in 1946. He lived in Nowosibirsk up to the age of 22 and held a job as a metalworker. In May 1969, he migrated to GDR (DDR - East Germany) and worked as a freelance interpreter and private investigator. The name of his alleged private investigation company was Siberian Scout, location: Berlin - Deutsches Reich (Berlin - German Reich).

Götz claims to be the son of a Russian KGB general. He also claims he used to be an active agent of the former KGB under the code name of Grigori, and that he smuggled children from GDR children's homes to pedophile high ranking Western officials and politicians (a conspiracy theory popular in the German extremist right scene). According to his allegations, he even had connections to Belgian pedophile murderer Marc Dutroux.[1] Götz accused numerous high-ranking German politicians as pedophiles. Among them, according to Götz, were former state presidents Richard von Weizsäcker and Johannes Rau, but also politicians like Jörg Schönbohm, Ole von Beust[2], Kuno Böse, Rainer Eppelmann and so on. The German newspaper Berliner Morgenpost published several articles about his fabricated stories. Götz wondered, however, why German authorities never charged the accused politicians and suspected a nation-wide conspiracy against him in this case. Similar denunciations were voiced by one Janett Seemann (also belonging to the German extremist right scene) whom Götz declared a fellow combatant.

The definite antisemite Iwan Götz considers himself a Jew and superior rabbi, but on the other hand denied this on several other occasions in internet pamphlets written by him[3], hosted on the websites of a member of the extremist right party NPD in Mittweida (Saxony). In order to increase his credibility, he presented a forged membership card of a Jewish organization from the town of Halle. It is obvious that this card shows no registration or serial number. According to information given by the Synagogengemeinde Halle, Götz never was and also presently is not a member of that organization[4] who announced to sue Götz. Furthermore, the Union Progressiver Juden in Deutschland e.V., in a public statement made January 19, 2009, declared[5][6] Götz has never been a member of the Synagogengemeinde Halle and nor a member of UPJD or WUPJ. WUPJ and the Union Progressiver Juden know of no Jewish institution or authority which bestowed the titles rabbi, rebbe or superior rabbi to Götz. Furthermore, the title Rabbi is not protected by German law.

The German ultra-conservative sedisvacantist Rolf Hermann Lingen is one of Iwan Götz' supporters.[7] Pamphlets by Götz can be found at the publishing company Franken Bücher (now Andromeda Buchversand). 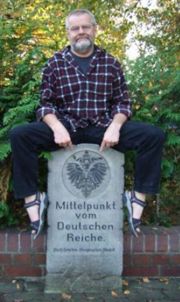 Götz was convicted in Germany for holocaust denial, and in a second degree trial Götz finally accepted the sentence in January 2009.

Götz distributed antisemitic flyers in Berlin at the end of 2006.[8] In the districts of Berlin-Charlottenburg and Berlin-Wilmersdorf, 20 complaints were filed by residents who had received such flyers. According to the German Police Department of Berlin, Götz may however be not punishable. This leads to the obvious speculation that Götz may suffer from a psychiatric disorder.

Götz also claimed to have attended a holocaust conference in Teheran in December 2006, but presents no proof for this allegation.

At the beginning of 2007, he delivered a speech, together with a Michael Wegner, in a bar in Stralsund on the issue of an alleged battle of the government of the Federal Republic of Germany against the German population (Kampf der BRD gegen die deutsche Bevölkerung). Invitations had been sent to local economic pundits who were expected to pay for their participation in the event. More invitations were sent to police officers and the head of Ordnungsamt (public order department) of Anklam, Dirk Bierwerth. The speech was organized by a "ICG Industry Consulting Group" - allegedly an international non-profit counceling committee which claimed to act as a spotter or whistle-blowing organization against manipulation by mass media. The two speakers were the only members of this ICG which has been closed. On the former ICG-website (now deleted), Götz claimed that Jews were sucking hundreds of milliards [billions] of German Marks and Euros from the German people by using the propaganda ly of the holocaust. In front of cameras of North German TV channel NDR, Götz once more denied the holocaust and said that the so-called Reichskristallnacht (Reichsprogromnacht - the Night of Broken Glass or "night of shattered crystal", a pogrom in Nazi Germany on November 9–10, 1938) had been organized by the Jews themselves. [...] there was no holocaust ! That is something they invented [...] (Quote of Götz as recorded by NDR-TV). The invited officials did not intervene. The head of the Anklam public order department, remaining passive, consequently lost his job, because he did not react appropriately.[9][10][11][12] Götz was successfully charged for his statements, and the department of public prosecution seized the NDR-TV tape as evidence. Denial of holocaust is a crime in Germany, punishable under the law §130 StGB.

Götz also worked as a translator for a Russian film about the extremist right conspiray-story of Neuschwabenland.[13]

Götz claimed he was Foreign Secretary of Freestate Saxony[14] in the government of KRR activist Olaf Thomas Opelt. But he also declared to hold the position of Special Ambassador of the Reichsland Freistaat Preußen.

Texts by Götz can be found in Zentralkurier (part of the Parchimer Stadtkurier). According to the Secret Service of Germany (Verfassungsschutz), members of the extreme right party Interim Partei Deutschland (IPD) were the real editors of Zentralkurier.[15] 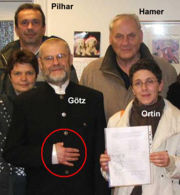 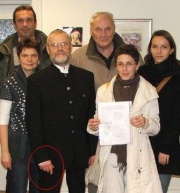 Ryke Geerd Hamer, inventor of the controversial Germanic New Medicine, considers Goetz to be a Wanderrabbiner (wandering/hiking rabbi) and Oberrabbiner (superior rabbi) and believes Goetz was a witness for his pseudomedical views strongly influenced by anti-semitism. At the request of Hamer, Götz signed a very peculiar document on December 17, 2008 in Sandefjord/Norway, in which he claims all rabbis and oncologists in the world knew for certain that Hamer's doctrine was correct, and that every Jewish patient in the world received medical treatment according to Hamer's rules. At the same time, non-Jewish patients allegedly were not allowed to profit from his method and this led to a genocide of 20 million people. The document, however, shows no evidence for these absurd allegations, no witness is quoted. According to a Swiss blogger, Hamer in vain tried to find quotes supporting his hypotheses in the Talmud[16] and contacted that man. The Jewish Talmud (books Mischna and Gemara), however, was written centuries ago and is considered completed. The complete Mischnajoth was even sent to Hamer, but his search did not produce any evidence in support of his claims.

Hamer is convinced that Götz was the only superior rabbi of Germany, and that Götz used to work as a KGB agent with Russian Vladimir Putin. Putin and Götz were to be seen as senior Jewish KGB officers and therefore knew everything about the alleged genocide against non-Jewish patients. An Austrian follower of Hamer, Helmut Pilhar, presents this weird document by Hamer and Götz on his websites with photos showing Iwan Götz making strange gestures.

According to his own statements, Götz was convicted in Germany several times:

On January 26, 2009, Götz accepted the final sentence in the case of holocaust denial (Amtsgericht Anklam).[17] He was formerly sentenced to six months on probation.

Because of his frequent criminal convictions, he was examined by a psychiatrist at least twice, and lost his driver's licence. A judge in vain attempted to incapacitate Götz.