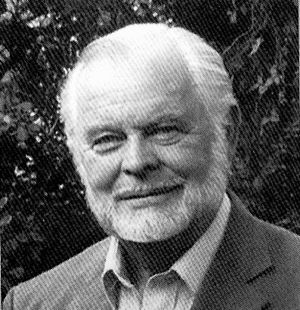 Griffin advertises dubious alternative medicine therapies like Krebiozen and Amygdalin which are without proof of efficacy. In 1998 Griffian assumed he had found Noah's Ark using radar near the Ararat, a belief that called creationists to action. However, a later repetition of the measurement did not find the alleged Ark.[1]

Griffin also supports the refuted Hunza myth, i.e. there were no cancer incidents among this ethnic group in the mountains of Pakistan. Acording to Griffin, they also had a higher life expectancy than North Americans, with some individuals reaching a life span of up to 120 years.[2]

Note: G. Edward Griffin is not identical with the conspiracy theorist Des Griffin or the Truther David Ray Griffin. 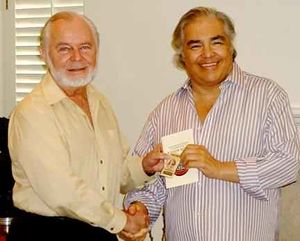 Griffin believes elections in countries with electronic voting machines were manipulated and campaigned for their abolition in favour of voting by ballot. Griffin is a supporter of unconventional cancer therapies and the „Cancer Cure Foundation“. Griffin, a medical layperson, in texts of pseudoscientific disinformation supports the ineffective use of Amygdalin (which he calls vitamine B17) to treat cancer in particular. His website links to suppliers of this agent unapproved in Germany. According to Griffin, cancer was caused by a lack of Amygdalin. He claims this agent was suppressed, which could be traced back to the financial activities of John D. Rockefeller. Certain high ranking persons active worldwide were interfering with medical science and thus were responsible for negative test results regarding Amygdalin to this day. An article in American Journal of Public Health refuted this as a conspiracy theory and a corresponding book with the title A world without cancer[3] was slammed, as Griffin just reported anecdotal miracle healings without referring to verifiable facts.