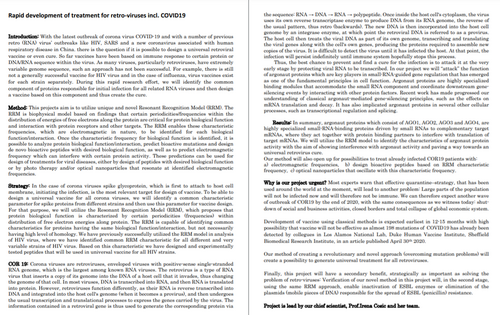 Introduction: With the latest outbreak of corona virus COVID-19 and with a number of previous retro (RNA) virus’ outbreaks like HIV, SARS and a new coronavirus associated with human respiratory disease in China. there is the question if it is possible to design a universal retroviral vaccine or even cure. So far vaccines have been based on immune response to certain protein or DNA/RNA sequence within the virus. As many viruses, particularly retroviruses, have extremely variable genome sequence, such an approach has not been successful. For example, there is still not a generally successful vaccine for HIV virus and in the case of influenza, virus vaccines exist for each strain separately. During this rapid research effort, we will identify the common component of proteins responsible for initial infection for all related RNA viruses and then design a vaccine based on this component and thus create the cure.

Strategy: In the case of corona viruses spike glycoprotein, which is first to attach to host cell membrane, initiating the infection, is the most relevant target for design of vaccine. To be able to design a universal vaccine for all corona viruses, we will identify a common characteristic parameter for spike proteins from different strains and then use this parameter for vaccine design. For that purpose, we will utilize the Resonant Recognition Model (RRM), which proposes that protein biological function is characterized by certain periodicities (frequencies) within distribution of free electron energies along protein. The RRM is capable of identifying common characteristics for proteins having the same biological function/interaction, but not necessarily having high level of homology. We have previously successfully utilized the RRM model in analysis of HIV virus, where we have identified common RRM characteristic for all different and very variable strains of HIV virus. Based on this characteristic we have designed and experimentally tested peptides that will be used in universal vaccine for all HIV strains.

COR 19: Corona viruses are retroviruses, enveloped viruses with positive-sense single-stranded RNA genome, which is the largest among known RNA viruses. The retrovirus is a type of RNA virus that inserts a copy of its genome into the DNA of a host cell that it invades, thus changing the genome of that cell. In most viruses, DNA is transcribed into RNA, and then RNA is translated into protein. However, retroviruses function differently, as their RNA is reverse transcribed into DNA and integrated into the host cell's genome (when it becomes a provirus), and then undergoes the usual transcription and translational processes to express the genes carried by the virus. The information contained in a retroviral gene is thus used to generate the corresponding protein via the sequence: RNA → DNA → RNA → polypeptide. Once inside the host cell's cytoplasm, the virus uses its own reverse transcriptase enzyme to produce DNA from its RNA genome, the reverse of the usual pattern, thus retro (backwards). The new DNA is then incorporated into the host cell genome by an integrase enzyme, at which point the retroviral DNA is referred to as a provirus. The host cell then treats the viral DNA as part of its own genome, transcribing and translating the viral genes along with the cell's own genes, producing the proteins required to assemble new copies of the virus. It is difficult to detect the virus until it has infected the host. At that point, the infection will persist indefinitely until immune system hopefully stops this process. Thus, the best chance to prevent and find a cure for the infection is to attack it at the very early stage by protecting viral RNA to be transcribed. In our project we will “attack” the function of argonaut proteins which are key players in small-RNA-guided gene regulation that has emerged as one of the fundamental principles in cell function. Argonaut proteins are highly specialized binding modules that accommodate the small RNA component and coordinate downstream genesilencing events by interacting with other protein factors. Recent work has made progressed our understanding of classical argonaut-mediated gene-silencing principles, such as the effects on mRNA translation and decay. It has also implicated argonaut proteins in several other cellular processes, such as transcriptional regulation and splicing. Results: In summary, argonaut proteins which consist of AGO1, AGO2, AGO3 and AGO4, are highly specialized small-RNA-binding proteins driven by small RNAs to complementary target mRNAs, where they act together with protein binding partners to interfere with translation of target mRNAs. We will utilize the RRM model to identify the characteristics of argonaut protein activity with the aim of showing interference with argonaut activity and paving a way towards an universal retrovirus cure. Our method will also open up for possibilities to treat already infected COR19 patients with: a) electromagnetic frequencies, b) design bioactive peptides based on RRM characteristic frequency, c) optical nanoparticles that oscillate with this characteristic frequency. Why is our project urgent? Most experts warn that effective quarantine–strategy, that has been used around the world at the moment, will lead to another problem: Large parts of the population will not be infected now and will therefore not be immune. We can therefore expect another wave of outbreak of COR19 by the end of 2020, with the same consequences as we witness today: shutdown of social and business activities, closed borders and total collapse of global economic system.

Development of vaccine using classical methods is expected earliest in 12-15 months with high possibility that vaccine will not be effective as almost 198 mutations of COVID19 has already been detected by collegues in Los Alamos National Lab, Duke Human Vaccine Institute, Sheffield Biomedical Research Institute, in an article published April 30th 2020. Our method of creating a revolutionary and novel approach (overcoming mutation problems) will create a possibility to generate universal treatment for all retroviruses. Finally, this project will have a secondary benefit, strategically as important as solving the problem of retro-viruses: Verification of our novel method in this project will, in the second stage, using the same RRM approach, enable inactivation of ESBL enzymes or elimination of the plasmids (mobile pieces of DNA) responsible for the spread of ESBL (penicillin) resistance. Project is lead by our chief scientist, Prof.Irena Cosic and her team.