Difference between revisions of "Water-fuelled car" 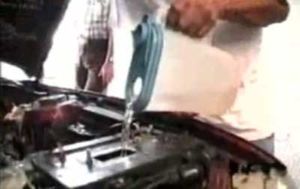 All water-fuelled car models discussed so far "work" on the same principle: By electrolysis, water is split into hydrogen and oxygen under energy consumption and a normal internal combustion engine is then run on oxyhydrogen. The necessary electrical energy to create the oxyhydrogen with a small electrolysis cell is taken from the alternator and/or a car battery. Such a construction can work for a limited span of time – i.e. until the car battery has been emptied and all oxyhydrogen is used up.

Since the electrical energy taken from the alternator would have to surpass the engine output, the missing energy to keep the engine running for a long time has to be supplied by ways based on esoteric hypotheses lacking scientific recognition. Further concepts discussed by supporters of such concepts are Space Energy and neutrinos (Neutrinolysis). 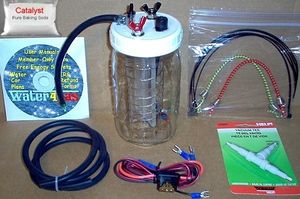 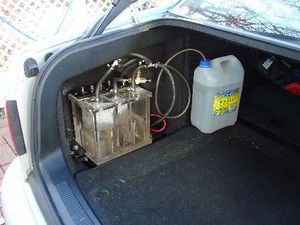 Elektrolysis of the company FISS

Shady profiteers sell refitting kits (e.g. at eBay) which are allegedly enables the conversion of a car with a regular combustion engine into a water-fuelled car. A chemical agent necessary to allow electrolysis, e.g. baking powder, is added.

The company Fiss-Management from Erfurt, Germany (enjoying a rather damaged reputation because of a warning by the Federal Agency for Financial Market Supervision and by "Test" magazine and probably not more than a one-man-show) offers an on-board-electrolysis cell for passenger cars (2,260 €) and trucks (9,520 €). See also: Spritsparkarte

The higher temperature also causes a higher abrasion of the engine and a higher load for the cooling system; the increased need for repairs and spare parts has a negative impact on the environmental record of the system.

Conclusion: To try and operate an internal combustion engine with extra oxyhydrogen which is created on-board through electrolysis leads to a higher consumption of fuel. The more oxyhydrogen is created, the more expensive the system will be. Running a car just with oxyhydrogen created by above device leads to 4-5 times more fuel consumption:

Only about 0,4 x 0,62 x 0,6 x 0,4 = 6% (perhaps 10% at max.) of the gasoline's energy is used. Combustion of just gasoline results in an efficiency of 40% at max. Operating a car only with oxyhydrogen from the on-board electrolysis consumes at least 4 to 5 times as much. Massive usage of this principle (even mixed) would have catastrophic impacts from an ecological point of view due to higher CO2 emissions and result in much higher costs.

Achieving a pure hydrogen operation with the kits offered is illusory since a usual alternator is in no way constructed to provide enough output even for a small car: The maximum output of an alternator (for large executive cars) is about 3,000 W which corresponds roughly to the drive train of a small scooter.

Producing hydrogen gas externally in industrial electrolysis facilities to supply all cars would please only the industries producing nuclear energy and brown coal since the additional huge amounts of electrical energy necessary cannot be provided by renewable energy sources. Additionally, further problems storing hydrogen and high losses would have to be addressed: Unlike gasoline, hydrogen will diffuse through the walls of usual storage tanks, so after some time, the tank will be empty...

Research done in USA proved that such an onboard water electrolysis does not make sense since fuel consumption increases, it does not decrease as claimed.[3][4][5][6]

Clean World Energies and their H-Reactor

A company named Clean World Energies GmbH from the town of Jülich (Germany) advertises their so-called "H-Reactors" and "Super-Cubes" on the German market. The divices are said to decrease fuel consumption and pollution by engines by adding hydrogen. The electrical energy to power their "Electrolyser" is generated by the on-board car battery.

Ronn Motor Company from Texas[7] sells the Scorpion, a sports car with an alleged consumption of 6 l/100 km (40 miles per gallon) for 150,000 US-Dollars.[8] Manufacturers claim this was due to using the energy of the alternator to produce hydrogen which is then added to the air/fuel mixture and causes the alleged high mileage. The method is called H2GO.

The hydrogen used, created with low efficiency through electrolysis from a small water tank of eleven liters, has to be produced while driving, increasing the consumption.
Ronn Motor Company announced it will offer an H2GO Hydrogen-On-Demand (HOD) system for other vehicles allowing to convert existing vehicles for 999 USD to decrease consumption and emissions. Ronn claims consumption was reduced by 20% to 25% and CO2-emission was reduced by 90%.


A toy car powered by a small fuel cell is marketed with the brand name of H2GO, too. 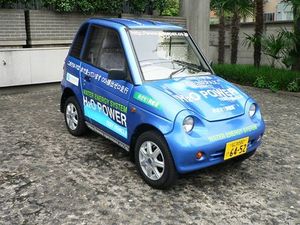 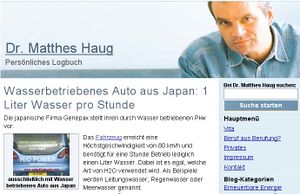 In June 2008, a Japanese company by the name of Genepax Water Energy System presented an electric water-fuel car (Reva) claiming it could be operated by water and air only and needed no more than one litre of water from any water source for a one hour drive at 80 kms/h. Genepax did not reveal the exact nature of the energy source and manufacturers just refer to an unspecified "energy generator" for its Water Energy System (WES), which allegedly is able to split hydrogen from water using some kind of metal hydride and a "chemical reaction". Hydrogen gas is then used as fuel.

The product of the reaction is again water. This principle makes it a perpetual motion device. With alkali metals (sodium), hydrogen may be won from water: Unfortunately, this would not only set free hydrogen; but oxygen will be bound to the metal and cannot be used. During operation, the metal hydrid will be used up and serve as the actual energy source. It has to be created by using energy. The car therefore is not powered by some miraculous energy from water, it is powered by a primary battery.[9] Professional journals like Popular Mechanics commented upon the alleged miracle car with "rubbish"[10], while scientific circles ignored it. The website genepax.co.jp was abandoned in February 2009. Matthes Haug still advertises Genepax as a car which runs with water. 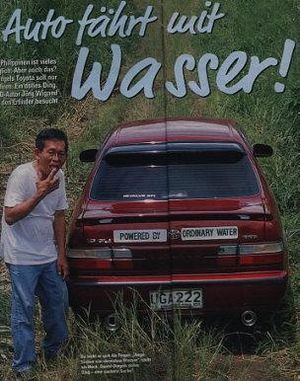 A tinkerer and con man named Daniel Dingel from Manila [2] received worldwide attention when he brought up a "water-powered" car. Dingel claimed his Toyota Corolla was powered by the energy of imploding compressed ether energy. As a result, even reporters of journal Auto-Bild (a German car journal) travelled to the Philippines to report on the scam.

In December 2008 news reports announced Dingel, by now 82 year old, had been sentenced to a maximum of 20 years imprisonment by Parañaque City Regional Trial Court for fraud (estafa). He was also sentenced to pay 380.000 Dollars in damages.[11] Dingel, who claimed he was not interested in money, had taken 410.000 Dollars from a Dr. John Ding Young of Taiwanese Formosa Plastics Group in 2000, allegedly to continue research on his method. But Dingel was not able to present a "hydrogen generator" and three working cars. After receiving the money, Dingel no longer responded to emails but presented alleged higher offers from competing companies. He claimed he did not want to cooperate with Formosa Plastics Group anymore since he feared for his life. He referred to an inventor named Stan Meyer who was allegedly poisoned by the oil industry in 1998. When the charges against him became known publically, he drew 375.603 Dollar from the bank account opnened for the deposits. The Philippine Department of Science and Technology called his alleged invention a hoax.[12]