Difference between revisions of "Morgan Maez" 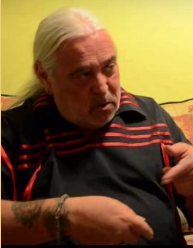 Morgan Maez aka Eaglebear, born 1950 presumably in Pagosa Springs/Colorado, is one of the longest established plastic shamans on the Newage market. He claims to be a member of the Apache nation and a great-great-son of Goyathlay [Geronimo]. According to information obtainable online, Maez' birthname was Margarita George Maez which he seems to have changed legally.[1] Further biographical information is not available online. He seems to be a resident of Asheville/North Carolina.

Maez claims to be a trained Apache medicine person, even being "one of the few living Apache medicine men", and having received a respective training by his elders. However, both the Fort Sills Apache, in 1999, and the Mescalero Apache nation in New Mexico confirmed Maez is no descendant of Geronimo and did not receive a training as a ceremonial person. [2] It must furthermore be noticed that if Maez did happen to be a member of the nation, he should be able to name the band he belongs to and his ancestral lines. He has, however, never provided such information.

However, in a recent advertisement for a "Shamanic Congress" in Spain from May 20-22, 2016, Maez now gets described as a Chiricahua Apache [the Chiricahua now live at both Fort Sill and the Mescalero reservation] born "at one of the poorest reservations of the USA in New Mexico".[3] While it may certainly go down well with his European and Euro-American audience to describe the Mescalero reservation as extremely poor, this does not quite reflect the facts, since the reservation has been quite successful in introducing an ecologically-oriented tourism and runs a skiing resort[4], earns money with hunting and fishing licences, runs a hotel and casino and two museums, and has been successfully active in cattle breeding and lumber industry since several decades.[5]

A further claim made by Maez is an alleged training as a Lakota medicine person, too. Articles and information dating back to the early 1990ies also mention he was allegedly trained by Cheyenne and Cree medicine persons.[6] While it is quite usual a practice of plastic shamans to claim trainings with several indigenous nations, such trainings do not occur in reality and are but a certain indicator the claiming person is a fake medicine man.

It becomes apparent from Maez' use of Lakota terms like inipi and chanupa [sic] that he does not exploit Apache spirituality, but sells Lakota ceremonies.

In older articles and biographical information provided online, Maez is also said to have studied child psychology at the University of Utah, and parapsychology at the University of California in Berkeley. While there is indeed one person who earned a Ph.D. in Parapsychology from Berkeley[7], there was never a respective course offered there. Maez further claims to have received certifications as a hypnotherapist and to be trained in acupressure, acupuncture, astrology and martial arts.[8] All these practices do not reflect indigenous customs.

Another artile dating back to August 1990 reports that Maez allegedly adopted 16 children who came from families with substance-abusing parents.[9]

Another claim was Maez' cooperation with an alleged Maori "medicine man" by the name of Joseph Winterhawk Martin aka "Airiki Wairua". Reports obtainable online claim that Martin was no Maori and not recognized by them, and mention that he was sentenced to a term in prison, probably a life term, for having exploited his position as a boy-scout leader to sexually abuse several of the children, all under age.[10]

Maez has been active as a plastic shaman for more than 30 years. There is one German Newage author and lecturer by the name of Peter Orzechowski who claims to have been trained by Maez between 1986 and 1991 and to have received his authorisation to do "shamanic healing rituals".[11]

According to information provided online, he has not been active only in the US, but also in Brazil, New Zealand, Mexico, Chile, Cuba, Russia, China, Israel, Haiti, Madagascar and the Vatican, where he sold indigenous ceremonies like the Sundance, alleged pipe ceremonies, and sweatlodges.[12] Apart from activities in Mexico and Spain, activities in the countries claimed cannot be verified from material obtainable online.

In December 1995, Maez founded his own church, the "Church of Indigenous Spiritualism, Inc." in North Carolina. Online platforms providing business information name the founder as "Morgan Eaglebear Maez" and a location in Asheville/North Carolina.[13] The church has managed to obtain a tax-exempt status which it apparently keeps until today. Online research for any activities of this church does not yield any results, although the church remains active officially.

The most obvious criticism arises from the fact that Maez is not recognised as a tribal member by either the Fort Sill Apache nor the Mescalero Apache nation, both of which include persons of Chiricahua Apache ancestry. As an alleged descendant of Goyathlay, Maez should be able to present family in at least one of these nations which he apparently can not. According to information published in 1999 by Ms Ruey H. Dawson, then chairperson of the Fort Sill Apache in Oklahoma, Maez is not enrolled with either the Fort Sill nor the Mescalero Apache nations and did not receive any training as a medicine person by either of the nations. As Dawson points out, the nations do very well know their ceremonial persons.[14]

Maez' alleged academic merits also cannot be verified, and indeed seem at least in part questionable (the degree in "parapsychology"). His further alleged qualification in hypnotherapy also cannot be verified, and the others relate to Newage practices. Thus Maez appears as another Newage vendor on the market mixing alleged indigenous ceremonies with esoteric practice.

However, there are also several reports regarding his conduct available online which accuse him of including sexual practices into alleged indigenous ceremonies. As a rule of thumb, any ceremony offered including such practices may be written off as a fake. Additionally, Maez seems to employ such practice to control his students resp. church members, not only by causing shame, but also by alienating them from family and friends in the course of time. Reports particularly mention alleged rites including homosexual activities among and with his students with the claim of their need to overcome homophobic notions and inhibitions. Other reports also mention Maez planned to engage in sexual activities with girls under age.[15] [16]