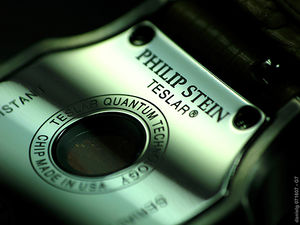 The Tesla Watch is a pseudoscientific, esoteric product supposed to protect from electro-magnetic pollution and to boost a vital force. Its effect allegedly originates from a Tesla coil or a particular Tesla chip.

The Tesla chip is said to have been invented by Andrija Puharich during the late 1970s (Puharich, among other things, is known for one of Uri Geller's mentors). The Tesla Chip is supposed to emanate a positive energetic field which resonates with the Schumann field (at approx. 7.8 Hz). The resulting energy field allegedly strengthens a natural electro-magnetic field of the human body, thus protecting said body from electro-magnetic pollution.

Watches of the brand Philip Stein are asserted to work according to the same principle, although using two chips. Philip Stein watches operate on so-called natural frequencies rather than electro-magnetic fields, and have been on sale since 2008.

There is no scientific proof of any efficacy (or an effect) of the chip or aforementioned frequencies. Furthermore, there seems to be no connection to the inventor Nikola Tesla.